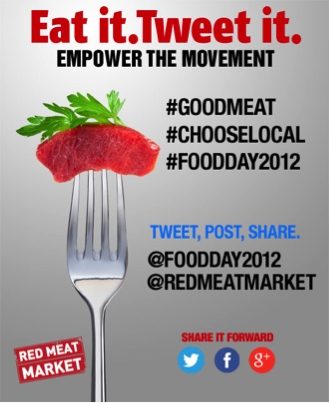 While everyone talks about the “Local Movement” of locally pastured, sustainable meat, and that we all should empower it, we at Red Meat Market ask HOW? It’s like asking an army to charge forward without guns or ammo or even a sense of common purpose! We can’t start a movement without a battle cry and a sense that we are being heard. Movements need a clear goal and a clear call to action. And today, social media is the weapon of choice and Twitter, Facebook and Google +, the ammunition!

I say, “empower the local meat system” with a national campaign called “Eat it! Tweet it!.” It uses two hashtags to drive the movement: #GoodMeat and #ChooseLocal. The campaign hashtags should be tweeted, shared and posted through all forms of social media.

Here’s how it works; when a local, meat loving patriot finds themselves in a place where a restaurant, butcher or chef doesn’t offer local meat but the owner or chef wants to, they simply use Twitter to tweet the hashtag, #GoodMeat #ChooseLocal and @tag the restaurant. This sends an “alert signal” to the entire local meat system to connect that restaurant with locally pastured meat providers. It can also be used to offer them praise.

The “Eat it Tweet it!” campaign (just like Obama’s!) has a clear goal and a clear call to action. It empowers local meat lovers with a rally cry to create change and revolution in the local meat system. It enables all meat lovers, carnivores, chefs, butchers and providers to unite and empower the local meat movement through the power of social sharing.

Our revolution targets local meat lovin’ #GoodMeat Carnivores who either can’t find good meats or can’t find a place to eat good meat and or don’t even know about the advantages of good meat.

Based in Chicago, we at Red Meat Market are witnessing the changing times. Chicago has always been a meat town and a center for change. One of the last scenes of The Jungle, Upton Sinclair’s 1908 masterpiece about Chicago’s meatpacking industry, takes place at a Socialist rally. Downtrodden and abused stockyard workers, many from Eastern Europe, all hopelessly exploited, froth in righteous anger as the orator chants, “Chicago will be ours! Chicago will be ours!”

Over a century later, the stockyards have been shut down, and a new rally cry for “#GoodMeat #ChooseLocal” commands the same righteous anger of our taking power of the food system back from the industrial distribution chain and giving it to the people

Then EAT IT and TWEET IT! and support the movement to locally pastured, antibiotic free meat!

How are you empowering a “Local Movement” of locally pastured, sustainable meat? Let us know in the comments, on Twitter using #hackmeat, on Facebook or at the Hack//Meat hackathon happening December 7-9 in NYC. 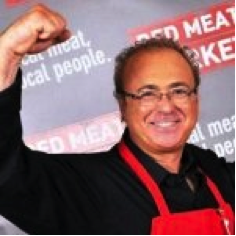 Mark Wilhelms is an entrepreneur who cut his teeth in the mid 90’s tech boom.Mark is an accomplished digital marketing, web development and social media professional who has run a successful technology firm in Chicago for over 18 years. He has more than 30 years experience in media, broadcast, agency and brand management and has led the development of more than 3,000 digital projects for some of the nation’s best known corporations.

He is a professional jazz pianist, fly fisherman and a horse lover. As a “city slicker” he found himself on cattle drives out west and fly fishing pack trips across the continental divide. This love for the west led him to become partners in a locally pastured, grass-fed beef cattle ranch in western, Illinois. In January of this year, he founded Red Meat Market to build a online social community of local meat providers and meat lovers. In just four months, Red Meat Market has been widely accepted in locavore circles as the destination for the Midwest local meat movement as membership and adoption continues to grow. Red Meat Market has been voted as one of Chicago’s top 70 new Tech Starts, finals in this year’s Chicago’s innovation awards and has appeared on multiple TV shows and articles but last but not least honored to have helped champion an outdoor Red Meat Market in honor and celebration of Food Day 2012 with the City of Chicago at Chicago’s Daley Plaza.

Mark will continue to build Red Meat Market in other markets to drive the movement against “Big Meat” and empower change through technology and events that educates and activates the “Local Meat System.” A system that is better for the environment, kinder to the animals and benefits the future health and welfare of the population.