Craft Coffee Builds a Database of Flavors, One Month at a Time

At first blush, putting craft coffee and data in the same sentence is like putting ice cubes in white wine. They don’t really mix, but some people make it work. So it is with Michael Horn, the founder of Craft Coffee, a monthly subscription service that delivers artisanal coffee to your door. They recently launched a fundraising campaign to expand the business and, in part, build an accessible database of thousands of tasting notes that will allow people to filter coffees by personal preference.

The company prides itself as being the most selective coffee subscription service nationwide. It receives about 50 batches a month from coffee roasters around the country and through a blind taste-testing process, selects the best of these, which it then measures out and ships to subscribers. For $22.49/month (based on a 6-month subscription), you get four ounces each from three different roasters, which they say is enough to make 42 cups of brew, along with tasting notes and tips.

“We’re more selective than Harvard,” says Horn, “it’s that hard for a coffee to get into your box.” 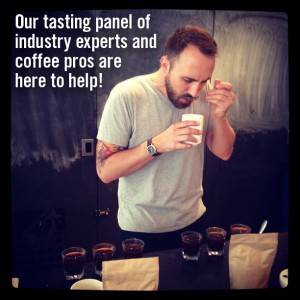 Through the tasting and testing process, the company produces new “tasting notes” every month. Each of these becomes a data point. An entire database of them, cross-referenced by origin, growing process, roasting method and more, could become the foundation of a tool that allows subscribers to sort coffee according to the exact taste they’re looking for. In later iterations, this database could be the basis for a recommendation engine and in turn opened up via an API so other applications could be built on top of it.

“These are the kinds of things we’re really excited about,” says Horn. A recent batch sent to subscribers included an Ethiopian coffee that was produced through a natural process, whereby the coffee been was allowed to dry within the cherry-like fruit that encases it, infusing the coffee that comes from it with a fruity taste. Craft Coffee’s database could help users find other coffees just like it.

The company received some initial backing from 500 Startups and is turning to customers for the next round of funding. Its use of Kickstarter in this way, to help build out its services, is a bit unique. If you pledge $25 or more, you get a voucher for a one-month subscription which is what the same subscription would cost through the website. The Kickstarter campaign might help to bring in new customers while donors basically get back the full amount of their donation in coffee. “It’s not like, fund our company or we won’t exist,” says Horn. “We have some initiatives we really love and need some resources to execute on these projects that will impact you as a customer.” Initially, the company was promising to donate a portion of the funds it raised if they surpassed the $25,000 or $50,000 marks, but Kickstarter made them take it down or take down the entire campaign, saying it violates Kickstarter’s terms and conditions.

Craft Coffee isn’t the only subscription service for coffee, or even the only one raising funds on Kickstarter, but it does seem to put a significant amount of care into how it fits into the larger ecosystem of coffee growers, distributors and roasters. “I’d say the majority we work with are direct trade coffees, where a relationship has been created [between the roaster and grower],” says Horn. Four Barrel, one of the company’s featured roasters, would be one such example. In short, direct trade is a kind of alternate route to fair trade when it comes to sourcing goods in a socially conscious way.

In the earlier days, Horn sat at coffee shops buying cappuccinos for people that agreed to talk and take surveys. The twin aspects of convenience and guidance kept coming up. “That’s why we developed the model we have,” says Horn. The monthly subscription offers the convenience while the “guidance” comes in the form of tasting notes, not unlike how wine clubs function. Also, the subscription model offers a regular touch point with customers.

“I used to go into coffee shops and talk to baristas,” says Horn, back when he was a law student at Cornell. Every time, he’d learn at least one new thing about the craft of coffee. “That’s the experience we’re trying to create.”