From SXSW to the White House, Food Data a Trending Topic

We may be a small subset of the population, but some people can’t get enough data about food.

Back in grad school,  I spent hours upon hours pouring over federal data, drafting surveys and developing new models to assess community food security, running experiments (such as nutritious vs. balanced meals) and overseeing the delivery and return of thousands of (paper!) surveys, which I later entered by hand as part of a scaling analysis. My love affair didn’t end there — over the past 10 years, especially through my work with Eat Well Guide, I have continued to monitor, analyze and strategize around USDA and other food systems data.

Open data and third party integration were just beginning in 2000; the first GIS maps were exciting but elementary, and I still recall my thrill at downloading early CPS (Current Population Survey) and ERS (Economic Research Service) data sets, only to be disheartened by the challenge in working with the limited fields and forms.  But accessibility and interest in federal data has grown dramatically over the years, and the recent launch of the USDA Know Your Farmer, Know Your Food Compass is proof of this evolution; it’s clear that research and development will never be the same.  And that’s exciting!

Open data is the new frontier.  Data has always been a sorely missing link in the food movement, and it is high time for it to help advocates improve our food and agriculture systems. During last week’s South by Southwest Interactive festival, #openfood was a trending topic on Twitter, and the panel “Better Food Through Open Data Standards” (led by Anthony Nicalo of Foodtree and featuring Danielle Gould of Food + Tech Connect, Britta Riley of Window Farms and Chacha Sikes of Code for America) was a major highlight, and not just for yours truly.

It is clear that there is a real need, and a real opportunity, to use data to tell the stories of the food movement and to support advancements in agriculture, advocacy, science and health.  Data is also a necessary tool for lawmakers to produce smarter policy that speaks to the needs of the people.

Data maintenance and accuracy, something we have learned a lot about in our years of curating and updating the Eat Well Guide, is also a major – and often overlooked – challenge which still needs to be addressed.

Projects like the new Code for America Brigade and last fall’s Food + Tech Connect’s Farm Bill Hackathon demonstrate emerging opportunities to unwrap data and share it in ways that make sense and are interesting. There is a clear need to create channels for data convergence on a larger scale and it is inspiring to see the USDA, as well as other agencies, respond to the call for leadership in this area 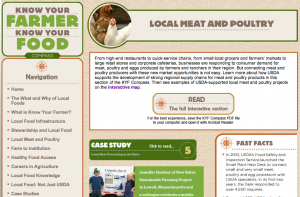 Last month, I was invited to the White House launch of the USDA’s Know Your Farmer, Know Your Food Compass (KYF2). The event was a ground-breaking one, the first virtual conversation of its kind, and it was a thrilling moment to be a part of.  Agriculture Deputy Secretary Kathleen Merrigan and White House Office of Public Engagement Director Jon Carson co-led a live video broadcast and Twitter chat in a room full of leading experts to discuss the future of food (#kyf2). 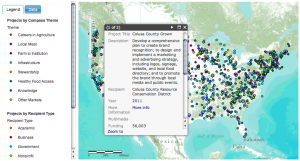 During the afternoon, Merrigan featured the new Compass Map, calling it “one of the most engaging docs we’ve ever produced.”  She also spotlighted foodhubs, proudly announced the“54% growth in farmers markets between 2001 and 2008” and touched upon plans to explore geo-spatial data as a way to learn more about local food economies.   It was clear to me that our administration had taken some giant steps forward through this exploration of open data as well as through their use of new media, even without “understanding much of it,” according to Merrigan.  But I also felt that these were just the first steps, and that it would be up to us, the representatives of the food movement, to carry this campaign forward and determine next steps for application and implementation of these resources.

When Deputy Merrigan called upon to me speak on local food data (the USDA has shared farmers’ market data with the GRACE food programs for the Eat Well Guide since 2010), I took the opportunity to speak about data usage across media and web platforms, our commitment to this work and next steps.  I called the Compass a “dream come true,” given the true need for this data. Unable to resist, I also previewed plans to co-host another hackathon this fall to support developers integrating USDA data into their own platforms.

Here are some of the other food and tech themes that emerged throughout the course of the day:

So what are the next steps when we consider the possibilities for innovation and application?  How can we support the USDA’s effort to share food data?  And how to increase data relevance and collaboration among projects? There are many opportunities ahead, and considering how far we’ve all – but especially the USDA – come since my graduate school days, it’s a thrill to be a part of this movement as we continue to make huge strides toward greater transparency and accessibility to information.