McDonalds recently announced it will no longer include “pink slime” (ammonium hydroxide) in its burgers. But what about all the other chemical additives we’ve never heard of and can’t pronounce?  Butylated Hydroxytoluene (BHT) in fruit bars?  Phytosterols and phytostanols in fruit juice?

Over the past few years several apps have popped up to help consumers figure out what is in their food and if they should eat it.  But last year the Center for Science in the Public Interest (CSPI) quietly released Chemical Cuisine, an app for Android and iPhones exclusively dedicated to explaining additives in our food, based on the impressive data collected by CSPI on more than 120 food additives.

“There is a lot of misinformation and conspiracy theorizing on the Internet about different food additives like high fructose corn syrup or aspartame,” says Jeff Cronin of CSPI.  “We cut through all that and present a science-based perspective.  Alternatively, people might see “caramel coloring” on food labels and assume it’s natural and innocuous.  The truth is it’s not natural and there may be problems with carcinogens forming when caramel coloring is made from an ammonia-sulfite process – the kind used in Coke and Pepsi.” 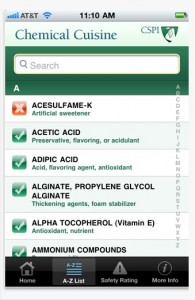 Like many consumer apps, Chemical Cuisine is made to use while shopping to access more information on the products we buy.  But unlike some of its more sophisticated cousins, it feeds directly from the html site and does not call up data based on bar or QR codes on food packaging.  Yet the information contained within is unparalleled.

“CSPI is a science-based organization that doesn’t take any money from the food industry, or any other industry for that matter,” says Cronin. “Our executive director, Michael Jacobson, is a microbiologist by training and wrote Eater’s Digest, an early book on food additives.  He has helped remove or restrict some of the most dangerous food additives from the marketplace.”

Sadly, CSPIs research – and now the data in the app – shows many dangerous chemical additives still sit on the shelves of the supermarket.  Yellow dye #6  found in 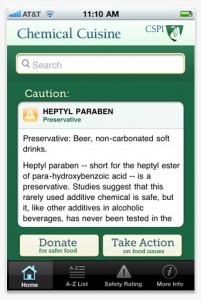 Velveta and Doritos, for example, “causes tumors in the adrenal gland and kidney….and may cause occasional, but sometimes severe, hypersensitivity reactions.”  Aspartame is also on the CSPI “avoid” list; “…initially thought to be the perfect artificial sweetener, it might cause cancer or neurological problems such as dizziness or hallucinations.”

CSPI developed the app with EchoDitto–a Boston-based technology firm with experience in the nonprofit sector.  “We’re certainly considering how we might make Chemical Cuisine more useful,” adds Cronin, but because of CSPI’s committment to not accepting corporate contributions or commercial advertising, the group is limited in its ability to partner wit other groups.

About the Author
Beth Hoffman has reported on food and agriculture for ten years, airing on NPR, The World, Latino USA, Living on Earth, KUER and KALW , and studied the food system in depth as a fellow and co-lecturer in the Africa Reporting Project at UC Berkeley’s School of Journalism. Hoffman competed a year long documentary project cooking with immigrant women in their homes, has traveled to India, Uganda and Ethiopia to report on rice production and chicken farming, and did a multipart series for KUER on the artistic, cultural and environmental connections we have to food. In addition to spending many hours on-farm in Utah, California and abroad, Hoffman also married into an Iowa farm family and is currently working with her husband to slowly convert the land into a sustainable orchard and hog farm. She currently lives in Albany, California. Hoffman’s previous work can be found on her website at bethaudio.com.
Previous Next
BHT, center for science in the public interest, chemical additives, chemical cuisine, consumer information, CSPI, food additives, food tech, know your food, Mobile, mobile app, mobile grocery advisor, shopping app