[This article is by Isaac Hopkins of  Nourishing the Planet, a project by the Worldwatch Institute, created to assesses the state of agricultural innovations with an emphasis on sustainability, diversity, and ecosystem health, as well as productivity.  To read the original article, see the Nourishing the Planet blog article Five Media Innovations That Help Feed the Planet]

As modern technology is adopted in widespread regions of our planet, it can provide poor people with access to many forms of media. Innovations like the internet and satellite technology are changing the face of food system solutions in even the poorest countries. Five media innovations stand out as helpful tools for poor populations to learn sustainable agricultural techniques. 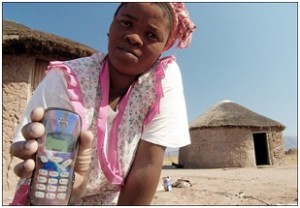 Access to television is expanding all over the planet. In India, for example, half of all households have televisions, and even in the poorest countries in Africa, many villages have shared sets. Entire communities often gather around a car battery-powered TV to watch futbol matches or soap operas.

Television in Action: Started by the U.K. Department for International Development (DFID), MakutanoJunction is a soap opera, full of the drama and twisting plotlines that you’d expect, but also packed with valuable health and development information. Characters teach each other about vaccines, fighting political corruption, and even agricultural techniques. In the seventh episode of season 6, for example, one character teaches the rest of town the technique of soaking seeds before planting them to encourage a faster, healthier crop. The response from viewers of the show was strong, with thousands of people requesting more information about seed soaking from the show’s producers. They were sent illustrated pamphlets explaining the technique, so thousands of Kenyans have learned a new method of increasing production by watching a soap opera!

Airing informational programs throughout the country may not always be the most efficient way to put television sets to work. Educational videos can be targeted more directly at a particular region or even at one village.

Videos in Action: The Africa Rice Centre  is using training videos to educate African rice growers in over 30 languages, showing them ways to improve growth and process their crops. As Food+Tech Connect reported recently, these farmer-to-farmer videos go beyond traditional training videos by fully explaining the techniques and why they work. AfricaRice tries to target videos to specific areas, in order to ensure that the information is useful for the farmers watching them. This includes an emphasis on featuring women as instructors, which they say allows the videos to reach about three times as many female farmers as traditional training videos do. The format is simple and illustrative, enabling even illiterate farmers to easily learn from them. Adding to the media outreach, local radio stations have been working with AfricaRice to spread the word about the training videos and even airing informative scripts based on them.

One of the foundations of successful and sustainable growth in food production is communication. Individual communities have begun to implement websites that foster open transfer of ideas and innovation throughout the community.

Community Websites in Action: Kibera, in Nairobi, Kenya, is believed to be the largest slum in sub-Saharan Africa, home to nearly one million people. Many farming innovations have emerged here, but limited communication can still prevent such ideas from being widely adopted. The Voice of Kibera project is trying to change that. Users of Voice of Kibera can report on anything via SMS and it can be posted on their website for all to read. While it is not specifically tailored for agriculture, the site can be a way for residents to communicate innovative ideas and organize meetings to teach new techniques and provide other training. According to Editorial Board member Gerry Omondi, “[Voice of] Kibera has steadily emerg[ed] as a powerful tool for…influencing the social, political and economic spheres in Kibera and beyond.”

News media, from local papers to international corporations, wield incredible power through the information they distribute. This information may be even more critical in impoverished nations, where access to reliable instruction and data can be difficult to obtain, than in the industrialized world.

News Media Partnerships in Action: The Food, Agriculture and Natural Resources Policy Analysis Network (FANRPAN) is a coalition of inter-sectoral network platforms present in more than a dozen countries in southern Africa. They are working to directly link farmers, researchers, and policy-makers, so that they can quickly implement and scale up innovations and policies that will provide food security for these countries. FANRPAN is partnering with media professionals to bring issues to the forefront of political discussions and to relate them more personally to those with authority. Information and Communication Technology (ICT) is steadily infiltrating societies in even the poorest areas of the planet, and it opens up opportunities for direct contact between people separated by distance, wealth, or power. FANRPAN employs a mixture of technological and traditional means of communication to bring people together, and they note that their website has become an “important information hub on agricultural related issues.”

According to The International Telecommunication Union, there are now 5.3 billion subscriptions to mobile phone service, and inexpensive devices can be found in even the poorest parts of the world. It is little surprise that the regions with the fastest growth in mobile phone usage are the areas with the fewest alternative means to access information.

Mobile Phones in Action: Mobile phones in India are allowing otherwise disconnected farmers to get priceless technical and market information. Rather than focusing on expensive phones that can access the internet, providers in India have harnessed the power of SMS texting to conduct all forms of business, from conveying news and market conditions to banking, and even listening to music. Mobile phone service providers in India have kept their phones cheap and their plans flexible, often pay-as-you-go, so even rural farmers can afford them. Indeed, almost 50 percent of India’s population has access to a cell phone. With subscription services like daily weather and crop market updates, major service providers are utilizing this emerging form of media to aid farmers in making smart decisions.

To read more about each of these media-related stories, follow these Nourishing the Planet links: Makutano Junction, Farm to Farm Videos, Voice of Kibera, FANRPAN, Texting on the Farm.

Isaac Hopkins is a research intern with the Nourishing the Planet project.