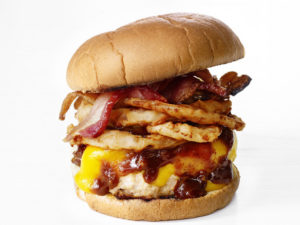 If you could plan your diet so that you got paid every time you chose a salad over a burger, would you chose the salad?

IBM “Master Inventor” Michael Paolini believes being rewarded in real time for improving one’s habits is exactly what will affect human behavior and help people become healthier.  One of the inventors of a new IBM patent “Providing consumers with incentives for healthy eating habits,” Paolini says the “method, system, and program” was created so that it can be implemented in a variety of ways to accommodate groups with very different needs – be it your health insurance company, your gluten-free diet group, or your employer.  But in order for the program to work, use of the system must be voluntary and trust has to first be established.

While several other companies like Massive Health are currently working on similar projects where participants can share their eating or exercise with a group to get immediate feedback, IBM’s is perhaps the only patent to allow groups to create their own criteria in tracking and incentivizing their goals.  The patent is also available for licensing from IBM.  I talked with Paolini about how the idea works, how it can be used, and the possible downsides of such a system.

Beth Hoffman: Tell us how you came up with the idea for the patent and what it is.

Michael Paolini: My colleagues and I would meet at Ruby Tuesday’s to talk about our work at IBM, and after many lunches, we found our clothes were not fitting like we wanted them to anymore.  So being a bunch of computer geeks, we turned to electronic methods to help ourselves instead of just the gym.

What we came up with was an idea based on Pavlovian theory.  Basically it is a system for tracking information about your own body, your exercise, and the food you are eating, with immediate feedback.  Then we expanded the idea so groups can use it not just for tracking for weight or health, but to track even things like spiritual restrictions – kosher diets for example – or to help people with allergies or vegetarian eating.

Oddly enough, one of the prototypes for the project was the Honda insight.  The car’s system told you how many miles per gallon you were getting, and drivers could see how their own acceleration or braking affected their gas mileage.  It was immediate feedback and was really effective in helping people change their driving habits.

We thought, what if we could have a similar system for eating?  From there came the idea of incentives – monetary, and others like publishing to a social network – to help people have immediate feedback about their habits.

BH:  How does the patent work?

MP: The idea is that individuals volunteer to have third parties involved in changing their behavior.  The group – maybe it is your insurance company, or maybe it is a group that wants to learn to eat better because of a food allergy – decides on criteria and members volunteer information so that the system can then evaluate a member’s actions based on that. Who determines what the criteria is or what eating system you should follow depends on the individual implementation.

Incentives would also be set based on what members felt was rewarding.  For example, at IBM we have a fitness program which employees can opt into.  The program then gives them a few hundred dollars back if they go to a trainer, or if they go running.  And many of us opt in, but without real time feedback and analytics.  This patent would add the immediate feedback, where a member could see points or monetary compensation in real time.  Studies have proven rewards don’t need to involve a large amount of money to affect what people are eating – a tenth of penny even works.

Groups could also assess what people were throwing out. For example, you might take a picture of your plate before and after, and the computer could recognize – he left his green beans.  In fact we have another patent – Veggie Vision – that can look at a vegetable, tell what it is and weigh it.  Or perhaps your group incorporates the use of a RFID tag on a plate or a bar code on a receipt that your phone recognizes when it gets near and asks you, ‘are you about to eat this?’  The code could also include ingredient data so that if you are trying to not eat gluten or have an lactose allergy, the system would alert you.  You could also trace sources and include information about where the green beans come from, if they are organic, or are grown with pesticides.

The program can also allow individuals to scan in dishes from a bar code on a menu and compare –given my background, which the system knows – is it better for me to have this dish or that?  The system can then give you a thumbs up on which is better for you.  And the program can go so far as to then make micropayments to your bank account – you get ten cents for the blue cheese dressing, but fifteen for oil vinegar.  Fries?  You get nothing.  It becomes real time decision making about your own health, and when you confirm which you chose to eat  – since you are doing this voluntarily – the system processes the payment.

IBM does not plan to sell this as a product – we are not making gadgets.  This patent and others like it are created for groups to license from us.  We did the heavy lifting in making it and whomever licenses it will get a working system out of it.

BH: Some say this kind of idea has “Big Brother” implications, where one’s health insurance company or an employer could force habit changes or be able to find out too much about an individual’s life.  Can you respond to those concerns?

MP: To me this technology is similar to a GPS system in cell phones.  You turn it on and it has the ability to follow you everywhere.  In the end, users decide to trust a third party with this private information.  They trust that Google will give them traffic information, but not tell the police when they are speeding. You allow Google to see your movement in city and to know personal things about you because you trust them.

The same is true for this kind of technology.  Users will only volunteer for the system if they trust the group collecting the information. The group who licenses the system will have to chose the most appropriate way for their users.  The technology does not decide how it will be implemented, the humans using it do.

The revolutionary part of this is that the system rewards you for actually being healthy, as opposed to many insurance plans that generically charge you based on your age.  I also think it is neat because if enough people opt in, we can then generate a lot of data about the human body.  We just don’t understand fully how the body works yet because we have never collected enough information about it.  But if millions of people track what they are doing in real time – this data would improve knowledge for all humanity.   I love the that idea that we can volunteer information about our health and the choices we make to form a kind of Wikipedia on the body.

But this is also new territory we are plumbing and as we implement ideas we will need to stumble and figure it out.

About the Author
Beth Hoffman has reported on food and agriculture for ten years, airing on NPR, The World, Latino USA, Living on Earth, KUER and KALW , and studied the food system in depth as a fellow and co-lecturer in the Africa Reporting Project at UC Berkeley’s School of Journalism. Hoffman competed a year long documentary project cooking with immigrant women in their homes, has traveled to India, Uganda and Ethiopia to report on rice production and chicken farming, and did a multipart series for KUER on the artistic, cultural and environmental connections we have to food. In addition to spending many hours on-farm in Utah, California and abroad, Hoffman also married into an Iowa farm family and is currently working with her husband to slowly convert the land into a sustainable orchard and hog farm. She currently lives in Albany, California. Hoffman’s previous work can be found on her website at bethaudio.com.
Previous Next
big brother implications, good eating habits, Honda insight, IBM, immediate feedback, incentivizing goals, incentivizing good habits, massive health, master inventor, michael paolini, patent, patent licensing, Providing consumers with incentives for healthy eating habits