In 1992, chefs Heston Blumenthal and Francois Benzi came up with a “food pairing hypothesis” stipulating that certain flavors go together because of their similar chemical make up.  SENSE for TASTE turned that hypothesis into an online tool called Foodpairing which, for a fee, “highlights foods that share common tastes and is designed to help identify unexpectedly tasty combinations,” states the company’s website.  The result is a Foodpairing tree; a visual aid for chefs and cocktailmakers.

Now an article in  Scientific Reports disputes the foodpairing concept.  Cultural preferences, the report states, “raises the question of whether there are any general patterns that determine the ingredient combinations used in food today or principles that transcend individual tastes and recipes.” 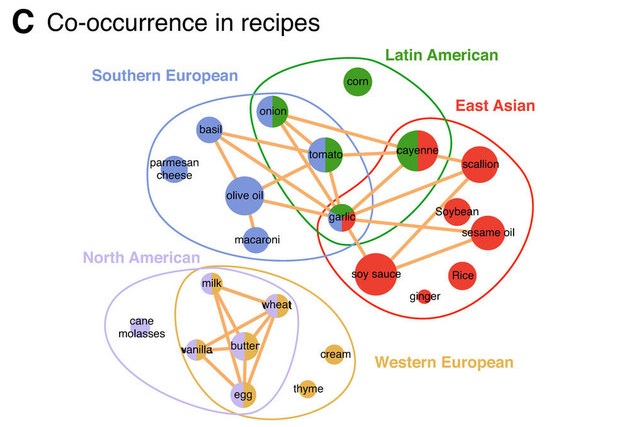 The report sees these differences as an opportunity. “Given the increasing availability of information on food preparation, our data-driven investigation opens new avenues towards a systematic understanding of culinary practice.”

Finally, the report concludes by saying that the current data sets available are limited and incomplete, and that more research on ingredients and flavor is needed.  “Better compound databases mitigating the incompleteness and the potential biases of the current data, could significantly improve our understanding of food,” summarizes the report.

About the Author
Beth Hoffman has reported on food and agriculture for ten years, airing on NPR, The World, Latino USA, Living on Earth, KUER and KALW , and studied the food system in depth as a fellow and co-lecturer in the Africa Reporting Project at UC Berkeley’s School of Journalism. Hoffman competed a year long documentary project cooking with immigrant women in their homes, has traveled to India, Uganda and Ethiopia to report on rice production and chicken farming, and did a multipart series for KUER on the artistic, cultural and environmental connections we have to food. In addition to spending many hours on-farm in Utah, California and abroad, Hoffman also married into an Iowa farm family and is currently working with her husband to slowly convert the land into a sustainable orchard and hog farm. She currently lives in Albany, California. Hoffman’s previous work can be found on her website at bethaudio.com.
Previous Next
Albert-László Barabási, cultural taste preferences, flavor compounds, Flavor network and the principles of food pairing, flavors, food pairing, Foodpairing, Francois Benzi, Heston Blumenthal, ingredients and flavor, James P. Bagrow, Scientific Reports, Sebastian E. Ahnert, sense for taste, Yong-Yeol Ahn