Infographic of the Week: Food Insecurity

This week’s pick goes to the good people at GOOD, whose “transparency department” produced an infographic looking at food insecurity in the U.S.

This infographic is a great example of how to take dry and boring statistics (US Census and USDA data) and turn them into an understandable and interesting visual.  While the color scheme is a bit overwhelming, it does help to convey the urgency of the matter, and allows viewers to easily see how the problem is growing.

New data since the creation of this chart shows now that SNAP (food stamp) use is up 8.1% from 2010 – equaling around 20% of the population in many southern states.  Food prices are also still rising.  SNAP is supported by money from the Farm Bill, and could face severe cuts in the 2012 version.

Below is an excerpt of the larger graphic.  To view the entire page, click here. 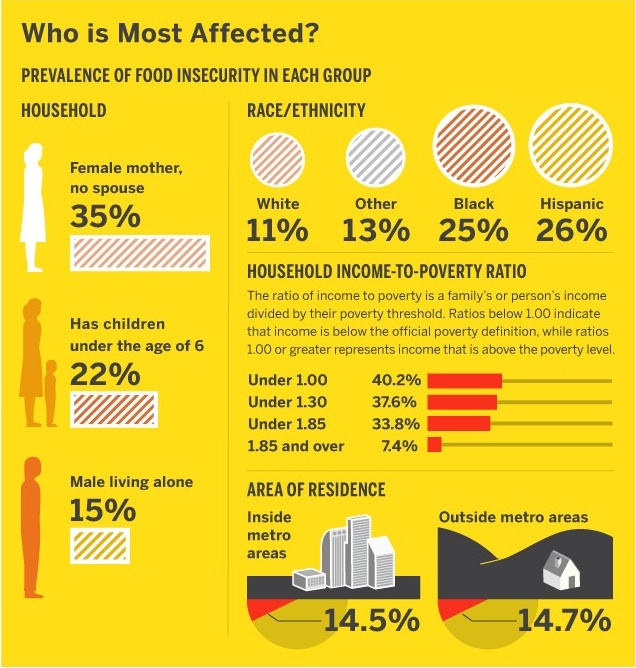 About the Author
Beth Hoffman has reported on food and agriculture for ten years, airing on NPR, The World, Latino USA, Living on Earth, KUER and KALW , and studied the food system in depth as a fellow and co-lecturer in the Africa Reporting Project at UC Berkeley’s School of Journalism. Hoffman competed a year long documentary project cooking with immigrant women in their homes, has traveled to India, Uganda and Ethiopia to report on rice production and chicken farming, and did a multipart series for KUER on the artistic, cultural and environmental connections we have to food. In addition to spending many hours on-farm in Utah, California and abroad, Hoffman also married into an Iowa farm family and is currently working with her husband to slowly convert the land into a sustainable orchard and hog farm. She currently lives in Albany, California. Hoffman’s previous work can be found on her website at bethaudio.com.
Previous Next
Food insecurity, GOOD, infographic, SNAP, US Census, USDA