What is the Farm Bill? And Why Should I Care? 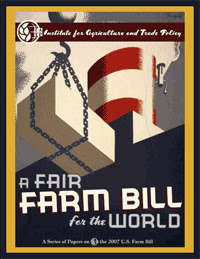 by Matthew Foster, Institute for Agriculture and Trade Policy.

Yesterday, Food+Tech Connect announced we will be holding a “Farm Bill Hackathon” on December 3rd. Over the course of 12 hours, participants will work together to produce tools or graphics that news media and organizations can use to convey the complexities and relevance of the Farm Bill to the public.

But what is the “Farm Bill?”

The Food, Conservation, and Energy Act of 2008 (Pub.L. 110-234, H.R. 2419, 122 Stat. 923) is commonly referred to as the Farm Bill. Covering a wide range of food and farming programs, the current 683 page bill is renegotiated and voted upon by the Congress roughly every five years. 2012 is the next time the act will be enacted, and the Congress is already working on the legislation behind closed doors, much to the dismay of those outside the process.

While much of the media attention surrounding the bill makes it sound like a simple document legalizing the subsidization of corn syrup, in actuality the majority of the $284 billion (if the same bill stays in place until 2017, the cost would rise to $604 billion) in federal funding goes mostly to nutritional programs like food stamps and school lunches.  In fact, the bill has 15 “titles” including support for the corn syrup producing “commodity crops,” agricultural research and development, forestry, rural development, trade, and energy. In other words, the bill directly impacts what is grown in this country, the cost of food, and what types of products are studied, promoted and eaten. 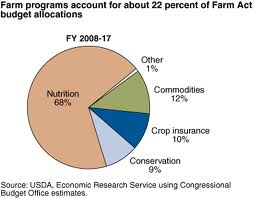 This is an important distinction in understanding the 2008 Farm Bill. The legislation is first and foremost a political document, decided through a process of negotiation and influence (although there is an attempt to now entirely circumvent the legislative process for the 2012 bill). Strange bedfellows therefore emerge and decisions about subsidies (a mostly rural phenomena) are tied to decisions about food stamps (a mostly urban expense), while conservation money is tied to ethanol production.  Some kinds of technology and data collection are extremely well funded under the bill, while others are not supported at all.

Initially the Farm Bill was called the Agricultural Adjustment Act of 1933, and aimed to address the “ national economic emergency by increasing agricultural purchasing power…[and] to provide emergency relief with respect to agricultural indebtedness.” Food abundancy and affordability were the focus of the early bills. But over the years the bill has become increasingly criticized for its cost to taxpayers in both direct payments and its environmental and social impacts. Some also question the necessity of many of the bill’s programs and point out several programs are no longer compatible with many of the country’s trading rules and policies.

The actual Food, Conservation, and Energy Act of 2008 is for the most part, unreadable. A more digestible form is the USDA/ERS2008 Side by Side Comparison, which allows viewers to look at the changes enacted in 2008 compared to what the bill formerly was.

Some other great resources:

What is the Farm Bill?

The Food, Conservation, and Energy Act of 2008 Summary and Possible Consequences

About the Author
Beth Hoffman has reported on food and agriculture for ten years, airing on NPR, The World, Latino USA, Living on Earth, KUER and KALW , and studied the food system in depth as a fellow and co-lecturer in the Africa Reporting Project at UC Berkeley’s School of Journalism. Hoffman competed a year long documentary project cooking with immigrant women in their homes, has traveled to India, Uganda and Ethiopia to report on rice production and chicken farming, and did a multipart series for KUER on the artistic, cultural and environmental connections we have to food. In addition to spending many hours on-farm in Utah, California and abroad, Hoffman also married into an Iowa farm family and is currently working with her husband to slowly convert the land into a sustainable orchard and hog farm. She currently lives in Albany, California. Hoffman’s previous work can be found on her website at bethaudio.com.
Previous Next
" agricultral research and development, Agricultural Adjustment Act of 1933, commodity crops, Conservation, corn syrup, data visualization, energy, farm bill, Farm Bill Hackathon, food, Food Bill, food conservation and Energy Act of 2008, food stamps, forestry, research and development, rural development, school lunch, SNAP, subsidy, trade, visualizations