FarmHack: Farmers and Designers Working Together 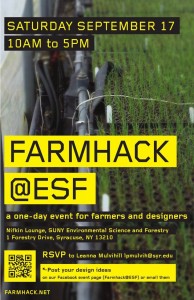 My favorite moment of Farmhack@ESF was watching my friend Taik Fountaine explain his idea for garlic processing to Jim Jing and Cameron Finucane, both graduate students at Cornell University studying robotics.  He held their rapt attention for a solid twenty minutes while he drew detailed sketches and Jim and Cameron listened intently, bringing their design experience and technical know-how to the process.

It is exactly the kind of interaction I was hoping would come out of this FarmHack – farmers and designers learning from each other and appreciating the value of their combined efforts.

Farm Hack is a branch of the National Young Farmers’ Coalition that consists of blogs and events where people can share information and technological innovations  in agriculture. This includes things like a better way to trellis tomatoes or information about creating a tool lending library.

The National Young Farmers’ Coalition is a non-profit organization built to create a support system for new farmers. They organize mixers for young farmers to socialize and create their own networks, and are political activists for legislation that will serve the next generation of farmers.  They also help with the practical side of farming through FarmHack.

Farmhack@ESF was the second FarmHack event. It was a one day conference for farmers and designers to collaborate on solutions for small scale agriculture. Participants came that day with design pitches that were presented to the group. People divided themselves according to their interests and pitches with overlapping goals joined forces. The group was small enough that the design teams remained fluid, and participants cycled through all of the designs and got to be involved in all of them. 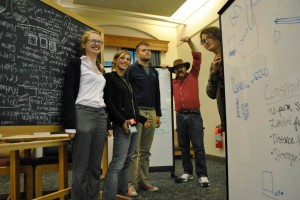 It was fascinating to see these two communities come together and interact in a way they would not have otherwise. The designers were mostly students from the SUNY Environmental Science and Forestry Department, and from Cornell University’s Environmental Engineering, Environmental Science, Robotics and Landscape Architecture Departments. The farmers were from Tantré Farm, Peacework Farm, Grindstone Farm, Hearty Roots Farm, Cobblestone Valley Farm, Sylvestor Manor and Library Farm. Pitches came from both sides – the farmers tended to have more tangible problems that needed fixing and the designers came to the table with conceptual ideas.

Students had the opportunity to engage the farmers in creating their designs and to receive feedback about what suited their needs. Beginning farmers took the opportunity to learn not only from students, but also from the more experienced farmers.

Four designs emerged from the event:

Library Farm in Cicero, NY is a community garden run by the public library with both borrowed individual plots and a community garden. Their issue was getting easy to use irrigation to their site. Currently they have water available at the library’s main building that must be carried several hundred yards to the gardens. They discussed collecting rain water from the roof of a tool shed and using a gravity-fed pump to dispense the water with drip tape.

The Field to Forest to Field group discussed bringing successional agroforestry systems back to the Northeast. Cultivated land would rotate through six stages: crop fields, weedy meadow, orchard, shrubs, early successional forest and late successional forest.  Each phase would have something to be harvested, virtually eliminating the concept of letting land lie fallow, but at the same time involves far less intensive harvests than traditional agriculture and the diversity of species growing and decaying would return nutrients back to the soil.

Taik’s garlic processing idea was to create a way to cut off the roots and stalks to allow the bulbs to dry. Each bulb must be handled with care not to bruise and damage them to prevent them from rotting in storage, a time consuming process.  The design that was settled upon was a press with two blades that allows the operator to cut the roots and stalk in one motion.

The final design presented was a manure/compost spreader attachment for a tractor.  A wide-mouthed bed with a conveyor belt attached to the axle would turn the wheels without the need for additional motors. A gate would allow the machine to spread a thin, even layer of compost over a bed as it moves – a marked improvement over having a person stand in a pickup truck shoveling clods of manure and compost over the side.

The first FarmHack event was held last spring at MIT. The next event is FarmHack 2.0 in New Hampshire this November and there is another event in the works at RISD.