An interactive Google map created by development shop Small Farm Central has spruced up the new Color of Food directory locating farms and food institutions in communities of color around the globe. 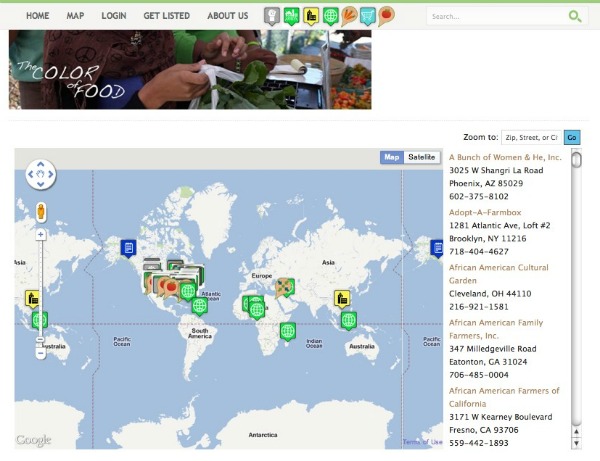 The map now shows not only the location of organizations, but also uses icons to differentiate between different types of groups, including farmers, urban growers, youth organizations, restaurants and nutrition programs.

With the map, Color of Food hopes to link parts of the now fragmented food system by allowing farmers, restaurants and organizations to connect with one another.

The vision for the Color of Food, and for the map, began when founder Natasha Bowens visited farms through the WWOOF network.  She found that few who took advantage of the program were people of color.

Bowens was also passionate about food justice, and began thinking more about the lack of access to food in many neighborhoods.  “Clearly the communities of color are being impacted more by the broken food system,” commented Bowens, “yet their voices are not being heard, neither within the system or within the new movement that is taking hold.”

She started a blog about her journey looking for “other brown farmers,” and wrote “The Color of Food,” for Grist.  The response was overwhelming.

“We started thinking about making our own network where farmers of color could really be put on the map,” says Bowens.  “A place where voices could be raised and connections could be made.  And how the great beautiful projects out there in these communities could be lifted up and shown as great models.”

Thus the Color of Food map was born.

Bowens and her team hopes to incorporate more farmers, activists and food system workers from around the world on the map.  They also say the map has helped put many farms online for the first time, and is connecting small farms to resources and activists in their region.  Now, says Bowens, it is up to those on the map to lead where it will go.

About the Author
Beth Hoffman has reported on food and agriculture for ten years, airing on NPR, The World, Latino USA, Living on Earth, KUER and KALW , and studied the food system in depth as a fellow and co-lecturer in the Africa Reporting Project at UC Berkeley’s School of Journalism. Hoffman competed a year long documentary project cooking with immigrant women in their homes, has traveled to India, Uganda and Ethiopia to report on rice production and chicken farming, and did a multipart series for KUER on the artistic, cultural and environmental connections we have to food. In addition to spending many hours on-farm in Utah, California and abroad, Hoffman also married into an Iowa farm family and is currently working with her husband to slowly convert the land into a sustainable orchard and hog farm. She currently lives in Albany, California. Hoffman’s previous work can be found on her website at bethaudio.com.
Previous Next
activists, advocacy, agriculture, asian farmers, black farmers, Color of Food, communities of color, farmers of color, food mapping., food tech, google map, Guides, Indian farmers, Mapping, natasha bowens, small farm central, Social Media, WWOOF network