GOOD Food Editor Nicola Twilley launched GOOD magazine’s new Food Hub this past January with a goal of engaging readers in dialogue and action. Through her editorial direction at GOOD, her blog Edible Geography, The Foodprint Project, the “Landscapes of Quarantine” exhibition, and Future Plural she helps us use food as a lens through which we can explore, understand, and reshape conversations about the design of health, global trade, poverty, cities, the environment, and of course food.

We were honored to have GOOD as our media sponsor for IdeaCOMM, the interactive farm-to-table lunch I co-hosted at SXSWi. It was my first opportunity to work with Twilley and afforded me the opportunity to learn more about her vision and goals for the GOOD Food Hub. In our conversation below, Twilley also offers interesting insights into how she uses journalism to create community and the food and tech trends she’s most excited about. 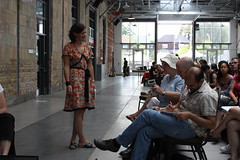 Danielle Gould:  Why did GOOD decide to launch a food section?

Nicola Twilley: We had always had food coverage. I was hired in December and at that time there was a new thinking that GOOD needed to build out the depth and breadth of it’s coverage of certain areas and really see if we could sort of define what ‘good food’, ‘good cities’, ‘good environment’, or ‘good education’ might look like. So when you go to the site you will see there are categories down the left hand side and we call those our hubs (education, environment, food, design) and we are staffing those up one by one to really define what it is that we think is good in those areas.

What I thought was particularly great being offered this job was that GOOD felt food was a strong enough of a topic to really lead this new editorial direction for the company. It was the first Hub to relaunch, which I think is great because people often think of food as just a lifestyle thing or as something that’s not essential and important to the world. But my whole take on food is that it can be one of the most effective ways to reshape health, global trade, poverty issues, the design of cities and their relationship to the landscape around them and the environment. Food touches on all of those things, so it shouldn’t be treated as just a lifestyle-y sort of thing and I was really glad that GOOD recognized that.

DG:  What is your goal with GOOD Food?

NT: The hubs are supposed to provide great in-depth coverage of original stories on a range of topics—so it’s not a recipe-focused section, it’s much more about the way food operates in our lives, in our cities, in our political system, etc.—while also creating a sense of community and actually making change happen in the world. We want to stand for something, not just cover things. It’s a really interesting fine line to tread as a journalist. Obviously you always want to try and be objective in your coverage and bring the debate to life for people, but I think we do also want to give people ways to get involved and make a difference. We want to be seen as leaders in the sorts of things we support. For example, open data and using data to make sense of our food system and rallying people around that to help design a better farm bill: that’s something that we actively want to support, not just report. 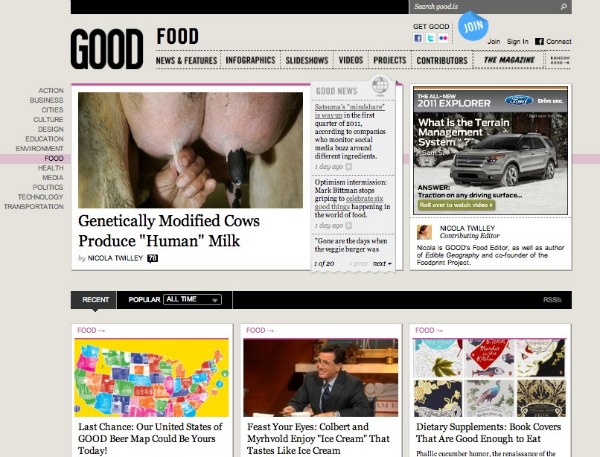 DG:  How are you using journalism to create community?

The other thing we’re doing that I think is very exciting is we have students volunteer blogging for us about what their learning and thinking (from angles such as: agriculture, food science, gastronomy, development context, culinary history) in a feature called  Food Studies. I think it will stir up a really interesting community of the next generation who are involved in food. The thing that’s interesting for me is that you can be studying food, but you can be in a design program or a science program or a history program or an anthro program or a culinary program, the fact that you can be coming at food from all of these different angles and learning about them is really incredible. What we hope is that by putting them on the same platform is that you can set up a dialogue.

There are a few more things we have in the pipeline. Mostly it’s important to us to make sure that people who come to GOOD aren’t just treated as readers, but have ways to get involved.

DG: What do you think is most exciting about the Food and Tech trends that you are seeing?

NT: I’m seeing a lot of collaborative and crowdsourcing tools such as  mapping or location based-tagging tools where people can contribute to building a larger picture. I think that is one of the most exciting things for me. I think also, while not particularly new, there is a growing sense of the importance of making data visually comprehensible and the ways that people are evolving to do that. I think it’s something I’ve seen going on for a few years, but people are really waking up to the fact that a well designed infographic makes data useful in new ways and an interactive infographic designed really well can do that even better. Whereas in the past the USDA might have just put out a report, now they will design a resport that has infographics and splits the dollar bill into different things. It just goes to show that people are beginning to incorporate this language across the board and I think that is really exciting as well.

About the Author
Danielle Gould is the founder of Food+Tech Connect. Connect with her on Twitter, Google+, or Linkedin.
Previous Next
"Food For Thinkers", collaboration, crowdsourcing, data, Edible Geography, GOOD, idea, nicola twilley, technology, USDA