Last week, I posted a provocation for a ‘Massive Brainstorm‘ on how we could use social media to affect the 2012 Farm Bill. 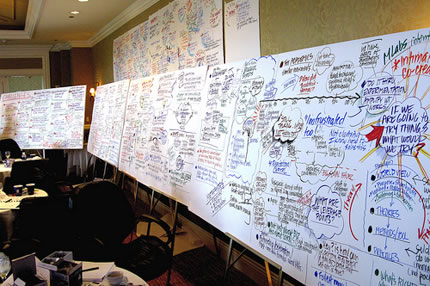 Inspired by the use of social media in the mid-term elections, I was curious to see who else might be thinking about this. I was also curious to see if I could engage individuals from my diverse network in the ideation process, and even more interested in seeing how the post would flow through the facebook & twitterspheres.

This is just a start…

Over the coming weeks, I will be posting resources & interviews about the Farm Bill and how it might relate to the food+tech community. I will continue to host and encourage conversation on this blog.

You are ALL invited to contribute ideas, stories, videos, questions, posts- think of this as our open innovation lab.

As promised, here are the fantastic ideas that came out of the first week of conversation. Huge thanks to all of you (entrepreneurs, technologists, social media experts, wonks, activists, community organizers) who took the time to contribute your insights & ideas.

The Farm Bill is so huge, so important, and so intimating — social media is the perfect way to break the issues down into small, digestible bites. Social media isn’t about the movers and shakers, and its not concerned with special interest groups and lobbyists. We can use it to connect with people who share our concerns and to create actionable plans that make a real difference. I’m hugely optimistic about the potential for us to make a real difference in the 2012 Farm Bill. – Lee Zukor Simple Good & Tasty & Understanding the Farm Bill: A Citizen’s Guide to a Better Food System

Yes! I think a big part of engagement will have to be about educating the public on how the farm bill affects us in personal ways.

How about a Tumblr site: What Does the Farm Bill Have To Do With Me? (or something else with a shorter title). Quick little bits from the farm bill and how it affects people’s everyday lives.- Adriana Velez, Brooklyn Food Coalition

I’d like to start by understanding what the heck the farm bill says and having some kind of platform where I could get a clear understanding of what it really means for people. – Charlie O’Donnell, First Round Capital

We should talk – I do a lot of stuff with Twitter and large scale organizing, I’m an Iowa farm kid, and I’m a subject matter expert on renewable ammonia production. Find me @StrandedWind on Twitter … – Neal Rauhauser, ProgressivePST & Progressive Congress News

Idea: take a satirical approach to underscore the impact of massive corn/soybean subsidies in the US.

Processed foods typically have a multitude of ingredients in them that mostly derive from corn and soybean products. Something marketed as being relatively innocuous, e.g. “Healthy Choice Ham and Cheese,” can contain a whole slew of obscure, processed ingredients. It would be interesting to create a Foursquare account that would check-in every farm and factory that this “simple” prepared meal had to touch before it arrived at the supermarket. With this, we can show how the current food system supports a grossly overcomplicated supply chain.

The Farm Bill should be brought down to scale for the average consumer. This idea would show a normal supermarket shopper how policies in the Farm Bill affect the goods that people see and buy everyday.

i’m a millenial and i don’t watch tv or listen to the radio. however, i’m very active on twitter and facebook and also care about what i’m eating and where it comes from. i wonder how many other young people are just like me. if the supper club/young farmer movement gives a clue, i would think a lot. therefore, i feel like getting the word out about the 2012 farm bill through social media could be very effective in reaching a younger demographic. it is THE media for millenials. amen. – Katarina Maloney, Terlato Wines International

I saw your link on the techpresident newsletter.

I’m a foreign policy and national security wonk, but I think that some of my projects would have insights for you. What you’re doing on the farm bill is super important. It seems to me that we now need some models of how inside-ouside coordinating using district/state based sources (subject matter experts are also constituents, which gives them a fighting chance up against commercial lobbyists) Timing is everything.

if you’d like, we could talk on the phone and I could share some ideas with you. Check out the Afghanistan Congressional Communications Hub
I pulled this together this year with a research team when it became obvious that Congress was not understanding the non military side of US engagement in Afghanistan.

You might be able to create one of these for the farm bill, but it requires quite a bit of in person politicking to get inside sponsorship. (committee staff or a Member/Senator sponsor) plus the expertise…

It might not be obvious on the outside, but Congress follows the rules of tribal association and peer networks far more that it does linear notions of verified data and utility.- Lorelei Kelly, New Strategic Security Initiative

Social networking sites, like twitter and facebook are particular vehicles for building bridges between politics and youth movements. As we all know, youth voice is so critical to ensuring stewardship of any political movement and has the potential to create sustained follow up because social media tools are: free, accessible, and much easier to negotiate than letter writing or snail mail email. If the right authors of the social media tools are intelligent about how the message is written the message can be widely disseminated at a much faster rate.

The big challenge however, lies in the access to technology. There is still a HUGE Digital divide between those who have access to computers/smartphones and those that still need access. We need to overcome this issue so we can breakthrough this “divide.”

Danielle, funny enough, back in 2001 I was featured in an article on the Digital Divide back in the day before smartphones. Because while I was running food programs I found a great challenge in getting our clients access to the tools themselves. – Laurie Schoeman, New York Sun Works

In reading your post, I harken back to the anti-war movement of the 60’s and 70’s when we really only had word of mouth to get out protesters and the vote. The most cynical of those times would agree, this movement changed the course of this country. It showed how people can drive change. While you look too young to remember those days, I am sure you can imagine what those turnouts would have been like if we had technology to communicate? OMG! The beauty of today’s e-channels is the ability to educate people on things they didn’t know existed, perhaps including the 2012 Farm Bill, and then organize them to make a difference, all with a click! I thrived on joining and marching with 10’s of thousands, and sometimes 100’s of thousands, in the anti-Vietnam War days. I’m now excited at the prospect of joining 10’s of millions, or 100’s of millions through the world, to educate and affect change! Once again, Food + Tech, you’ve got me thinking and excited about the prospects of community! – Deanna Gould