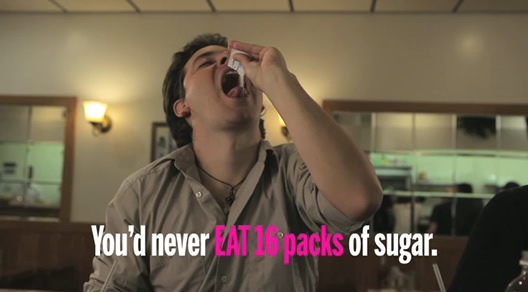 “Would you ever eat 16 packets of sugar?”

That’s what NYC Department of Health is asking in their newly released internet “Pouring On the Pounds” campaign video.

Roughly three out of five New Yorkers are overweight or obese, and sugary beverages are fueling the epidemic. While this video is lighthearted, its message is serious. The sugar consumed in these drinks can lead to obesity and other health consequences, including diabetes and heart disease. We hope that this campaign will encourage people to consider healthier alternatives to sugary drinks, such as water, seltzer or low-fat milk.

The new video can be seen at the Health Department’s website, on You Tube, and on facebook to make it easy for people share it with friends.

What do you think of the video? Is it an effective way to raise consciousness and encourage better eating habits?