Kuli Kuli on Diversifying Monocultures of People and Plants 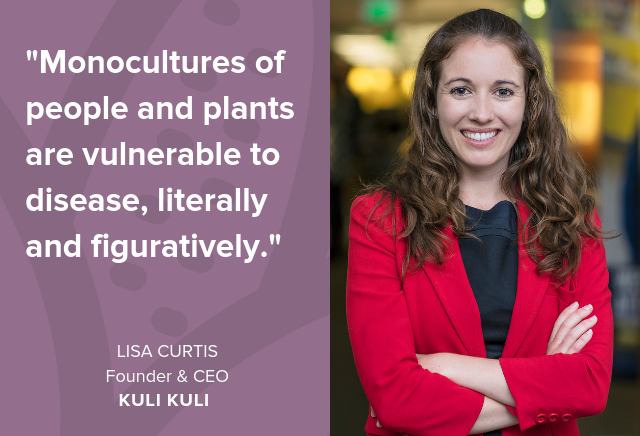 Food+Tech Connect and The Future Market are hosting Biodiversity: The Intersection of Taste & Sustainability, an editorial series featuring interviews with over 45 leading food industry CEOs, executives, farmers, investors and researchers on the role of biodiversity in the food industry. See the full list of participants and read about why biodiversity in food is important here. We are also producing a biodiversity exhibit at The Winter Fancy Food Show, so please stop by to say hello.

Kuli Kuli, the moringa brand that introduced the green superfood to the US market, is a great example of a CPG company putting biodiversity into practice. It has created an international market for an underutilized superfood, while also supporting sustainable livelihoods for its farmers.

Listed as one of the Rediscovered Food Initiatives’ 25 forgotten supercrops, moringa is a naturally regenerative, nutritional powerhouse. Kuli Kuli sources its moringa directly from women’s cooperatives and small family farmers around the world. It has partnered with over 1,300 farmers, and has provided $2 million in income to women-led farming cooperatives, nonprofits and family farms.

The conversation around biodiversity in food typically centers around crop, species and ecosystem diversity. For Kuli Kuli, it’s equally important to diversify the people responsible for producing our food. Below, we speak with founder and CEO Lisa Curtis about improving Kuli Kuli’s diversity by actively recruiting more people of color and people from lower-income backgrounds.

Come taste Kuli Kuli in The Future Market’s Biodiversity Exhibit at The Fancy Food Show, located in the What’s Next in Food room,  January 12-15, 2019.

Danielle Gould: Is biodiversity a priority for Kuli Kuli? If so, how and why?

Lisa Curtis: Kuli Kuli firmly believes that variety is the spice of life. It is in the richness of diversity that magic happens. We are working diligently towards increasing the biodiversity of our team, our customers, our products and our planet. Quite frankly, we’re terrified by recent statistics showing that half of all plants and animals on land could be extinct by 2050. We’re equally frightened by the geopolitical trends towards isolation and power consolidation that further marginalize historically oppressed groups.

DG: How does Kuli Kuli define and think about biodiversity?

LC: Biodiversity is about the strength and variety of an ecosystem. It’s hard to measure but easy to feel. It’s the positive feeling you get when you walk into a moringa field intercropped with beans and carrots or enter into an office with a biodiverse group of people and opinions.

DG: What is Kuli Kuli doing or planning to do to promote biodiversity?

LC: Kuli Kuli is actively seeking to recruit more people of color and folks from lower-income backgrounds into our company. We find it frustrating that the food industry is so homogenous. We’re also working closely with our suppliers to help them increase their biodiversity. Moringa is a naturally regenerative tree, with leaves that can be harvested four times a year, but we believe that we could do a lot more to promote the intercropping of other plants alongside moringa across our supply chain.

DG: What is the business case for products that promote a more biodiverse food system?

LC: Monocultures of people and plants are vulnerable to disease, literally and figuratively. In the case of people, it is altogether too easy for creativity to be stifled when everyone comes from similar backgrounds.

LC: I’m very excited about what the OSC2 diversity, equity and inclusion group is doing to promote a more biodiverse food system — starting with training the CEOs. I hope to see other groups join and/or create their own similar initiatives.

LC: Our greatest challenge is that we very rarely receive applications from people of color, though we get multiple applications per week of people who want to work at Kuli Kuli. I think a great opportunity is to help build the pipeline. We made a conscious effort to hire interns of color last summer and it was undoubtedly the most productive and inspiring class of interns we’ve ever had. I certainly think internship programs are a low-hanging fruit and we intend to do even more in the coming months.

DG: Does your average consumer care about biodiversity today? Why should they care? How do you (or will you) get them to care?

LC: I think most consumers care first and foremost about what the product does for them, their health and their taste buds. I think the biodiversity of the product and company that created it are secondary concerns. I don’t think we need consumers to care. I think that we need to do it because it makes our businesses stronger. There are real economic reasons to increase biodiversity even if the marketing ones might be harder to find.

LC: I think it’s very important for everyone to spend time studying two things: subconscious bias and agroforestry. Knowledge is power and I think there are so many people who would quickly act on that knowledge if only they were aware of those topics.

LC: Consider for a moment that of the estimated 200,000 plant species that exist, 75 percent of food worldwide is generated from only 12 different plants, according to the FAO. This over-dependence on a relatively small number of crops is increasing dangerous as our climate changes. At Kuli Kuli, we’re very interested in what we think of us as “crops of the future,” plants that grow well with little water or other inputs and are packed with nutrients. We are of course, obsessed with the potential of moringa, but are also very interested in other climate-smart crops and how we can eventually help introduce those to the US market.

LC: I would love to see more tree crops. Trees are key to the ecosystem integrity and are often very easy to cultivate.

LC: It’s amazing to watch how fast the food system has changed in the last decade. In the coming decade, I hope we can structure a food system that has biodiversity, sustainability and equity at its core, and in doing so create a world where malnutrition is something we read about in history books. 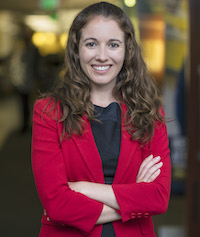 Lisa Curtis is the Founder & CEO of Kuli Kuli, the first brand to introduce the green superfood moringa to the US market. Lisa founded Kuli Kuli after working with moringa as a Peace Corps Volunteer. Lisa has grown Kuli Kuli from a Peace Corps dream into a multi-million dollar social enterprise that sells delicious moringa products in over 6,000 stores. Lisa and Kuli Kuli have been featured in The New York Times, The Wall Street Journal, Forbes and hundreds of other publications. Prior to Kuli Kuli, Lisa served as the Communications Director at Mosaic where she managed a team of six to grow the company from zero to over $5M invested in solar through Mosaic’s online marketplace. Previously, Lisa wrote political briefings for President Obama in the White House, served as a United Nations Environment Programme Youth Advisor and worked at an impact investment firm in India. She writes for a variety of outlets including Forbes and The Huffington Post. Lisa has been recognized as a StartingBloc Fellow, a Wild Gift Better World Entrepreneur, an Ashoka Emerging Innovator and a Udall Scholar. She was honored as a 30 Under 30 Leader by Forbes, GreenBiz and the University of California. She was also named to the Forbes 30 Under 30 “Top of the Class” for Social Entrepreneurship.