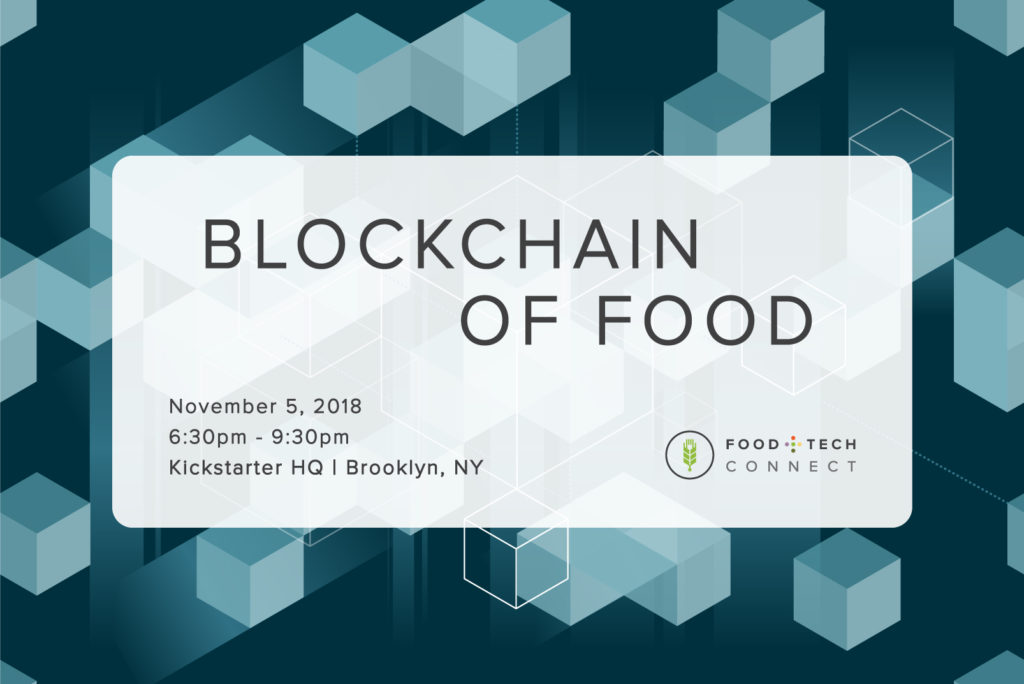 Blockchain technology has the potential to transform the food industry. Ten of the world’s biggest food companies have already joined forces to transform how the industry tracks food worldwide through this network. At the same time, new companies are emerging to introduce these technologies into the supply chain, demonstrating the potential it has to improve food system operations in several ways – from preventing foodborne illnesses to combating hunger.

Join us to hear from some of the game-changing startups who are deploying blockchain technology in our food system at our November Food+Tech Meetup. Founders will do a deep dive into their business models, technology, challenges and lessons learned. We will also have networking with the community and lots of great food and drinks to sample from Ginjan, 82 Labs, Bowery Farming, Believe in Bambara, Scraps, Burlap & Barrel, Amazi Foods, Toast Ale, Nora Snacks and Ripple Foods!

PRESENTERS:
Nicolas Jammet, Co-Founder & Chief Concept Officer, sweetgreen
Nic Jammet is Co-Founder & Chief Concept Officer of sweetgreen, the destination for simple, seasonal, healthy food. Nicolas graduated from Georgetown University’s McDonough School of Business, where he met fellow sweetgreen co-founders and co-CEOs, Nathaniel Ru and Jonathan Neman. He has been recognized as a key innovator in food and business, named to Fast Company’s “Most Creative People in Business,” Inc.’s “30 Under 30”, Forbes’ “30 Under 30” and Food & Wine’s “40 Big Food Thinkers 40 and Under”. In 2016, sweetgreen was named one of Fast Company’s “Most Innovative Companies.”

Phil Harris, Founder, Ripe.io
Phil is a founder at ripe.io that is deploying the “Blockchain of Food” that provides solutions to help answer what’s in your food, where it’s been and what’s happened to it. Our mission is to provide “Transparency in every Byte” from farm to fork to help our customers improve their intelligence and insights in to their food supply chain through our service of automation and business models through the application of blockchain and IoT. Phil has an extensive career spanning over 25 years in financial technology including roles at Nex, Nasdaq, CME Group, 360T and Blockstack.io an early blockchain start up.

Dr. Daniel Beckmann, Co-Founder, Foodshed.io
Dan Beckmann is a New Media developer and award-winning journalist whose career has spanned over a decade. He worked on the New Media team in Obama’s Chicago headquarters during the 2008 campaign. After the campaign he founded IB5k, a civically minded digital production agency that produces integrated new media solutions in the government, political, entertainment, marketing and journalism sectors. He is the co-founder of Foodshed.io, a blockchain technology company solving the inefficiencies of local food distribution by connecting sustainable producers to local wholesale markets.

Like our namesake borough, the Brooklyn Brewery is made up of a rich collection of characters from all over the world. In our Williamsburg home, these characters are dedicated to brewing and selling great beer and enriching the communities we serve.