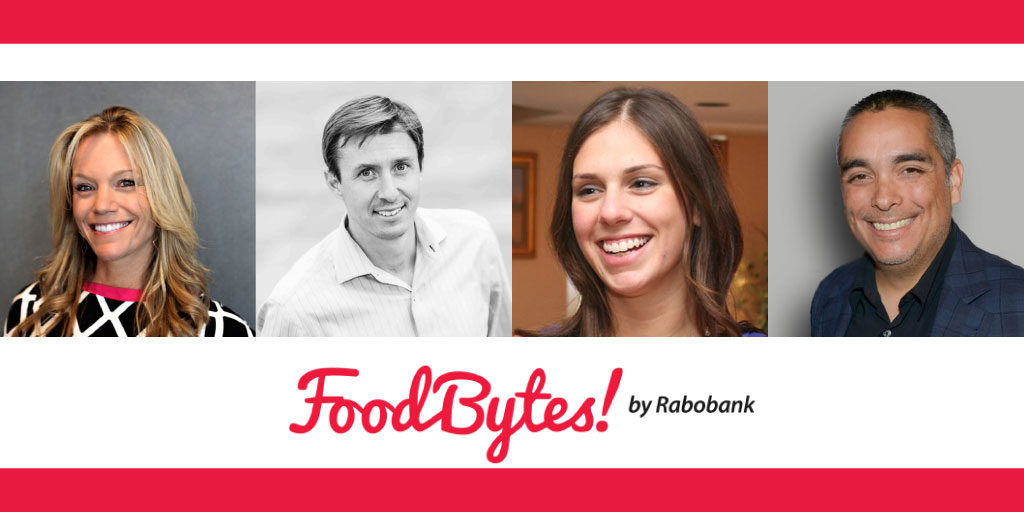 We are elated to announce our rockstar lineup of judges for FoodBytes! Boulder! Specializing in food policy, startup investment, food innovation trends and more, our esteemed panel brings very diverse expertise to the table.

Our judges include Boulder locals Robyn O’Brien, Founder of The AllergyKids Foundation, and Tom Spier, Founder and Managing Partner of Boulder Food Group. In addition, our very own Danielle Gould and Manuel Gonzalez, North America Head of Start-Up Innovation at Rabobank North America Wholesale, will judge the event.

At FoodBytes! Boulder, 10 innovative food, food tech and ag tech companies will give a 5-minute pitch to the judges and 200+ attendees. The judges will present the second-ever Judges’ Choice Award to the company that has the most innovative business model and potential impact on sustainable food production. Learn more about the criteria here.

Check out our judges’ bios below to learn more about their incredible work. Interested in pitching? Apply here. Want to attend and meet our rockstar judges? Snag your early bird ticket here.

Robyn O’Brien has been called “Food’s Erin Brockovich” by Bloomberg and the New York Times.  She received her MBA on a full scholarship from Rice University, graduating as the top woman in her class. She then went to work as an equity analyst on a team that managed $20 billion in assets. The team launched the company’s first hedge fund which won top performer at the company.  As an analyst she covered the food and tech industries, but her life took an abrupt turn when her youngest child had a life threatening allergic reaction.  She turned her analytical skills towards our food system, the health of our families, companies and economies and what we can do to invest in health.  She has helped lead a food movement and regularly appears in the press. Robyn’s work has been recognized by political leaders around the country, by General Mills, Chipotle, Coca Cola, Target, Chili’s Restaurants, investors and others in the food industry.  She is a recognized thought leader, an advisor to startups and multinationals, named by Forbes Women as a woman to follow on Twitter, named by SHAPE Magazine as a woman to shape the world, and the author of the bestseller The Unhealthy Truth and founder of Do Good and the AllergyKids Foundation. She lives in Boulder with her husband and four children, where she loves to run and garden.

Manuel Gonzalez is the North America Head of Start-Up Innovation at Rabobank. Formerly, he was Managing Director of the Rabobank North America Wholesale San Francisco office, and Head of the Western Region Corporate Clients for Rabobank North America Wholesale, prior to which he was the Country Head of Rabobank Mexico for four years. In 2015, Manuel created FoodBytes!, underscoring Rabobank’s mission of banking for food, which continues to search for new ways to increase impact in the Food and Agri innovation space.

Manuel joined Rabobank in 1996 as a project manager in the Project Finance business in Mexico. In 2003, he was named Head of Credit and a year later became the Head of Credit and Legal. Prior to Rabobank, Manuel was the General Manager for six years at Gonzalez Guzman Alimentos, a diary and food distribution company.