Guest post by Robert Ilijason, founder of Näraffär and Stay open, on using unmanned grocery stores to bring healthy food to small towns. This post is part of our Internet of Food Series. The views expressed are are solely those of the author and do not reflect the views of Food+Tech Connect. 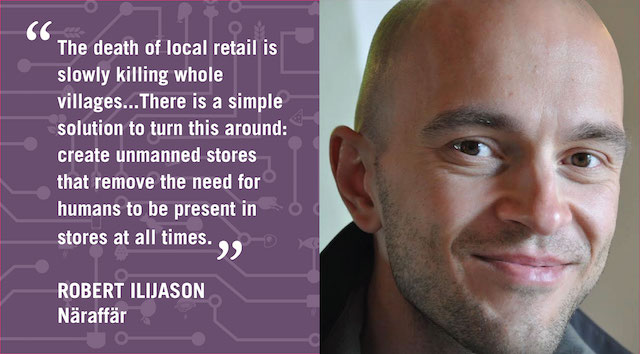 It is ironic that good, healthy food is harder to find the closer you get to the areas where it is produced. In most large cities it’s easy to find stores offering all kinds of sustainable goods, but it’s almost impossible to find any grocery stores in small villages, let alone ones that sell organic products.

The core reason for this is efficiency, primarily labor efficiency. It is expensive to hire a cashier to stand in a store when there are only a handful of customers shopping each day. Large supermarkets can maintain long opening hours and low prices, because they have the necessary foot traffic. This puts tremendous pressure on small stores that simply can’t compete and whose customers have begun to do their weekly shopping in the city instead.

It’s a negative spiral: small shop owners are forced to raise their prices, decrease their operating hours and replace good food with high margin sugar bombs, all in an attempt to make enough revenue to survive. Ultimately, this drives customers away and, with out customers, the small stores go out of business.

The death of local retail is slowly killing whole villages. Most people want milk to be available nearby. When local shops close people start moving away to cities. Over time only the older generation is left in small towns, even though many people wish they could live in a less densely populated areas.

UNMANNED GROCERY STORES GIVE ANYONE ACCESS TO SUSTAINABLE FOOD

There is a simple solution to turn this around: create unmanned grocery stores that remove the need for humans to be present in stores at all times.

Today’s technology makes it possible to create an unmanned store, such as Näraffär, based in Sweden. Using technology, customers can enter the store, scan their goods and pay without ever interacting with a cashier. All they need is an app on their smart phone.

Suddenly, it’s possible for a small village to open a store with the sustainable goods they want for reasonable prices and opening hours that are unbeatable. Let the local producers in and the shop turns in to a 24/7 farmers market. This is not just a solution for rural areas. Unmanned grocery stores work in towns and cities of all sizes.

Today, we don’t see much retailing in rural areas. In ten years time, however, access to good, healthy food will be readily available for a reasonable price even in the smallest of villages. You won’t have to order it online – you will be able to go down the street to get it.

Robert Ilijason is a contractor who spent the last 20 years using technology and algorithms to automate processes within companies such as Ericsson, TeliaSonera and IKEA. Recently a smashed baby food canister made him open an unmanned store in Viken, Sweden. Now he’s launching Stay Open to create an off-the-shelf solution to help other retailers around the world either create unmanned stores or expand the opening hours on existing stores.