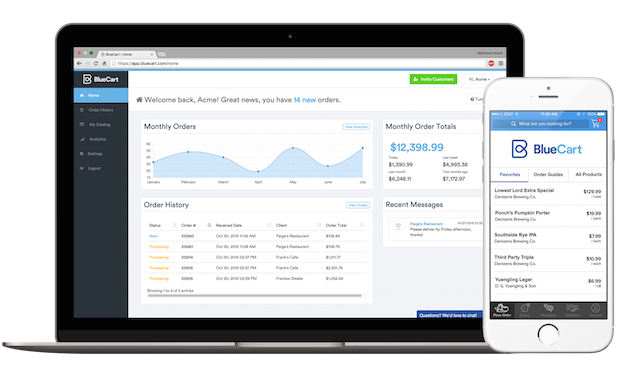 Supplier management for restaurants and foodservice operators that locally and sustainably-produced ingredients can be a huge headache. Managing orders from and payments to dozens of different suppliers via fax, text, phone, email and snail mail is time consuming and inefficient. The process can be equally frustrating for suppliers.

Washington, DC-based BlueCart wants to streamline this process, for free. Its online restaurant supplier management platform allows restaurants to place orders from all their suppliers – from alcohol and linens to produce and seafood – and to analyze their spending trends from a central dashboard. Suppliers are able to keep update product listings and pricing in real-time, process orders and manage customer relationships, as well as to receive reporting and analytics on its sales.

Recognizing the slim margins facing restaurants and suppliers, BlueCart offers its services for free. It generates revenue through paid advertising from services and suppliers that want to reach the restaurants on its platform. In the future, it will begin offering optional premium services for a fee. This business model is a departure from its competitors like Sourcery, Dine Market and ChefMod, which charge a commission or subscription fees.

Born out of an Georgetown MBA operations project with Sweetgreen, BlueCart, previously Improvonia, launched in 2014 and has raised $4 million from friends and family, Blue Run Ventures and Columbia Partners. Today, the startup has over 4,000 restaurants and suppliers actively using the platform, approximately 80 percent of which are restaurants.

I spoke with BlueCart co-founder Konstantin Zvereff to learn more about BlueCart’s business model. Our interview has been edited for clarity and length.

Danielle Gould: Last November, you rebranded Improvonia as BlueCart and began offering the service for free to both restaurants and suppliers. What were the key insights that lead to the newest iteration of the platform and business model?

Konstantin Zvereff: In terms of the business model, we’ve always believed that everyone in this industry — regardless of the size of their farm, warehouse, kitchen, or bank account — should have access to the latest tools and technology. In trying to make that happen, we very quickly realized three things:

First, margins are razor thin in this industry, and thinner still if you’re a small, specialty supplier or independent restaurant just starting out. Adding a 2 percent transaction fee or a few hundred dollars a month per restaurant is simply too big a hit for most places. It may sound small to a layman, but 2 percent of a total transaction can often mean closer to 20 percent or more of net profit for a supplier.

Second, given our large user base, our level of user engagement and the role of our users at their venues, advertisement was a clear opportunity, and in just a couple of months we signed up a large number of value added brands interested in our space, such as Square.

Third, when we started reaching out to users to ask them what they thought of some of our upcoming features, they said the most exciting thing: “We will gladly pay for that.” So, BlueCart will always be absolutely free to use, but we will be rolling out premium features that users can pay for if they’re interested. The word we’ve gotten so far is: they’re interested.

DG: BlueCart makes money through advertising. Many companies are being forced to diversify their revenue streams as they see ad sales dry up. What makes you think ad sales will be a sustainable revenue stream?

KZ: We definitely thought long and hard about this before we made the decision to go with advertising as a key revenue source, and what we found is that there is a big difference between advertising in a media outlet, and advertising on an SaaS platform.

An impression on a traditional media outlet can mean any number of things. Maybe a real target hit the page and saw the ad, but maybe it was a bot, maybe the target didn’t actually see the ad for some reason, or worse yet, maybe the ad was not served to the target customer at all.

With our platform, the people seeing these ads are decision makers, who are at the point of making a purchase. This is the kind of highly targeted advertising that is gaining traction even as others are having a harder time. We see it as not only sustainable, but primed for growth.

DG: Who are your advertisers? What is the typical market size for restaurant ad sales? What are your typical rates?

KZ: We’ve had everyone from Square to a specialty Mexican chili supplier advertise on the platform. It’s really open to anyone who wants to get in front of restaurants or suppliers or both.

One thing we do that’s very cool, is protect relationships between buyers and suppliers by only allowing suppliers to advertise to restaurants that don’t already have a supplier in their category. For instance, if I’m a coffee shop and I already order my bagels from Mike’s Number One Bagel Co., I’m not going to see ads for Joey’s Bigtime Bagels. But, if I don’t buy bagels through BlueCart, Joey’s Bigtime Bagels can get in front of me on the site and open a conversation just like that.

Suppliers really appreciate the level of thought that goes into our advertising policies. Our media kit lists ad rates and market sizes, but we’ll leave that to a by-request basis if that’s Okay!

DG: What was last year’s revenue and what kind of growth do you project this year?

KZ: We don’t disclose revenue, but our growth is probably best summed up in this recent blog post.

DG: There are a number of companies looking to streamline vendor management for restaurants. Why should restaurants choose BlueCart? How does it differentiate itself from competitors like Dine Market and Sourcery?

KZ: There are two types of ordering platforms: those that build their value proposition on price comparison and those that focus on strengthening relationships between restaurants and suppliers. BlueCart is the latter. Given the tremendous lack of tech in the back of house, we see new startups promising price comparison popping up every other month. These kinds of platforms are struggling. Over the last few months, three have approached us to gauge our interest in either merging, buying them out, or staging an “acqui-hire” to bring their staff on board with BlueCart before they disband. Today, these price comparison platforms are no longer in business.

The key distinguishing factors that set us apart are that BlueCart is free for all users, we do not pit suppliers against each other through comparison shopping and our vast network of suppliers and restaurants is coast-to-coast (soon to be international) and growing everyday.

DG: What is the biggest challenge you’ve faced launching and growing BlueCart?

KZ: This is still a new space, and it’s all about letting people know there’s a better way. Restaurants and suppliers have managed orders over phones, faxes, texts, and emails for a long time now. They’re used to it. When presented with BlueCart, some of them will inevitably say they already have a system. That may be true, but their system is probably forcing them to waste tons of time they don’t have. We always say we’re not selling them anything, we’re showing them something new. Still, they have to want to listen…

DG: What is the most surprising thing you’ve learned?

KZ: Chefs are incredibly sensitive about the fact that everybody thinks what they do is easy. Anyone who’s ever followed a recipe suddenly knows they could be a chef if they really wanted to. They have this idea that a professional chef is just someone who woke up one day and decided they wanted to open a restaurant because they were pretty good at making spaghetti and meatballs.

The truth could obviously not be further from that daydream, but chefs still have a huge chip on their shoulder about it and constantly feel the need to remind people that they worked outrageously hard to get where they are, and continue to work hard to stay there. We see what they do everyday, and definitely don’t need a reminder. These folks work HARD.