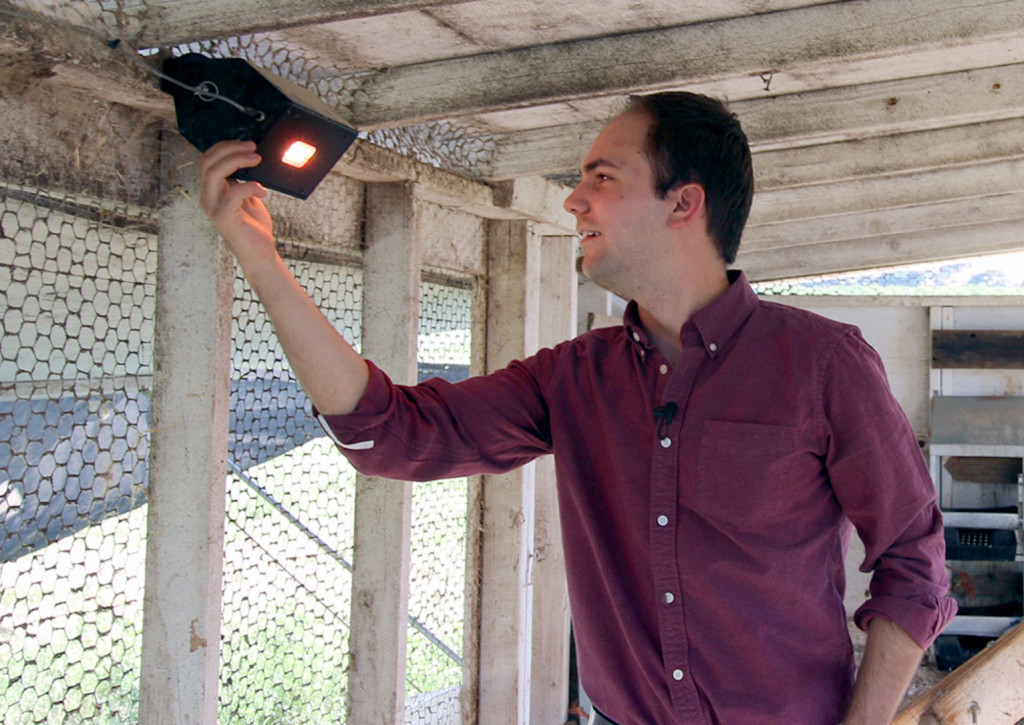 Millennial innovators are pioneering a better food future from farm to fork. Our Millennial Innovators Uprooting Our Food System series profiles the bright, creative and driven university students from around the world that make up Thought For Food (TFF), a next generation food innovation platform. A global community as well as a summit and business competition, TFF empowers breakthrough solutions to feed nine billion people by 2050. During this month-long series, we will highlight the work of select TFFers who are working to transform our food system.

In our third post, we interview Edward Silva, the co-founder of Henlight (in full disclosure, Edward Silva now works for Thought For Food). The California-based startup has created a solar powered lighting system to help poultry farmers – often pasture-raised – maintain egg production and viability during the winter months when egg production typically drops by 30-60 percent. Silva started Henlight as a recent graduate of University of California, Davis after earning funding as a 2013 Thought For Food Challenge participant. His dream is to make appropriate technologies more accessible to small scale farmers and improve our global food system. Our interview has been edited for brevity.

Thought For Food: How did the idea of Henlight come to be?

Edward Silva: I grew up on a small farm in California’s Central Valley and studied international agricultural development and technology management at the University of California, Davis. As an undergrad, I worked a variety of jobs and was exposed to many different models of food production. One thing I noticed, as did the team, is that a lot of technology that existed for large farms was missing for smaller scale farming operations.

As consumers, if we want our food system to be viable, adaptable and robust, we need innovate for all those producing our food, including small scale farmers. So our teams’ combined experiences in solar powered lighting, rural development and, fortunately, avian sciences, brought us to the idea of using lighting to help stimulate egg production during winter months, when production typically drops. This technology exists for large, conventional poultry, but by using solar power and making it small scale we created something appropriate for a different type of farmer.

TFF: What are some of the biggest lessons learned from building Henlight?

ES: One of the first pieces of advice we received was figure out what you do not know and find someone who does. I wanted to be the person that knew about–and how to do–everything, and that just isn’t possible if you want to maintain high quality. Learning that lesson saved us a lot of pain, and allowed us to bring on an amazing team.

Also, don’t forget to listen to your customer! There are few things sadder in entrepreneurship than talented people building solutions for problems customers do not have. Talking with customers means we can validate that our solution is relevant and opens the door for more breakthroughs. One of my favorite moments with Henlight farmers is after we’ve install a Henlight system, and they begin their sentence with, “You know what else we could use…”

TFF: Henlight won the 2013 TFF Challenge along with investment of $10,000. What type of progress were you able to make after TFF?

ES: I’m a bit biased, but beyond the funds, Thought For Food provided critical support through mentorship and resources. Belonging to the tight knit community was especially powerful in helping us harness the energy and pressure, inherent to start-ups, for progress in building and implementing Henlight.

At the start, we were very conservative with those funds and strategically brought on fantastic people to form the core team. In a short amount of time, and with very little additional investment, our small team conducted testing, designed and prototyped several iterations, manufactured and sold Henlight lighting units to farmers across the U.S.

TFF: Which companies or innovators do you look to for inspiration and why?

ES: One place I look to for inspiration is Peter Diamandis, serial innovator and X-Prize Chairman, and his team. While leveraging exponential technology to impact billions of people, he believes in the next generation and pushes twenty-somethings to build solutions for both impact and success.

From a large company perspective, the intrapreneurial spirit seen at Mars, Inc. and companies of that ilk inspires me greatly. Business is a platform to do big, impactful things, and I am impressed by their gumption to make our food system dramatically better.

TFF: What plans and partnerships can we expect to see from Henlight in the future?

ES: We will continue to explore the challenges small scale farmers face, and find solutions that easily integrate into their system. There is a lot of space for innovation at the small scale by simply translating technology that exist for large agriculture, and making it appropriate for small scale farmers around the world.  We hope that by building a suite of support products we can continue enabling small scale farmers to remain sustainable and viable. We also have fun dreaming about the potential of marrying exponential technologies with small scale farming.

If you are a university student passionate about disrupting our food systems, form a team and submit an idea to the 2015/16 Thought For Food Challenge by December 1. Ten finalist teams will win a trip to the TFF Summit in Zurich, Switzerland, where they will compete for a chance to win up to $15,000 to launch their ideas into real world solutions.