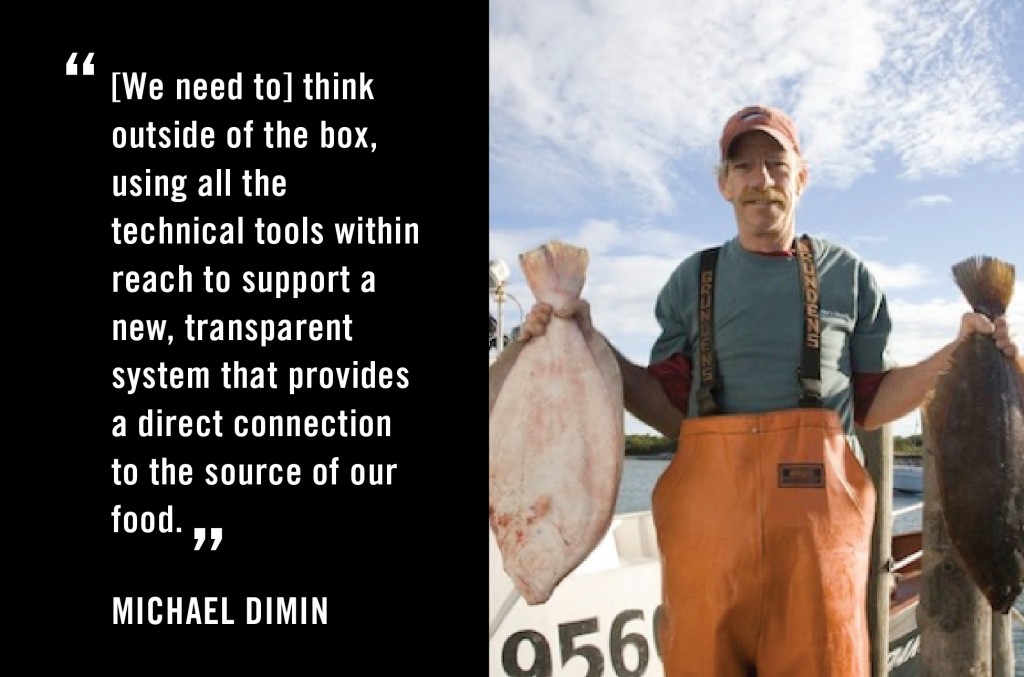 Guest post by Michael Dimin of Sea to Table. The views expressed here are solely those of the author and do not reflect the views of Food+Tech Connect.

When you eat fish, if you think about where it comes from, what do you imagine? You might guess that it was caught by a fisherman, sold to a store or restaurant, and then enjoyed by a diner. Yet almost always, the path your fish takes from the sea to the table is anything but simple. In the traditional supply chain, fish passes through many hands before arriving on your plate, and the freshest fish on the market is at least six days old. Over 90% of the fish consumed in the U.S. is imported, and it’s not unusual for fish caught in the U.S. to be sent overseas for processing and imported back. In such a convoluted supply chain, any connection to the fisherman who caught your fish is no more than myth.

Good fish is about freshness, but thanks to the long, opaque, traditional supply chain fresh seafood is often impossible to find. As Food & Wine Star Chef Clayton Chapman (The Grey Plume, Omaha) explains, “In the Midwest… we have access to some of the best meat and produce in the country, but it’s hard to find seafood that hasn’t been on a truck for a week.” It’s not uncommon for a chef to know the name of the person who grew his tomatoes, but most chefs have yet to apply that same farm-to-table approach to their seafood. Why is this? With a broken seafood supply chain chefs can’t get a fast, transparent connection to the source and fishermen can’t get proper value for their hard work.

Luckily for diners, and thanks largely to technology, chefs all around the country are beginning to make choices that support independent fishermen and sustainable fisheries. In the case of Sea to Table, this change is powered by a unique combination of Netsuite‘s cloud business suite on the back-end, and FedEx superlative logistics for next-day ground shipping to almost everywhere in the continental U.S. For example, in Nebraska, far from any coastline, chef Chapman can name the fisherman, boat, and time of landing of every fish he serves. New York City chef Peter Hoffman is another great example of how chefs can support small producers beyond their own backyard. Hoffman is known as the locavore of locavores; he was recently honored with the Slow Food NYC “Snailblazer” Award, and he is a passionate supporter of sockeye salmon from Bristol Bay, Alaska, the most sustainable source of wild salmon on the planet. In fact, Chefs Collaborative, of which Chef Hoffman was a founding board member, is currently sponsoring its annual “Savor Bristol Bay” dinner series. And while Bristol Bay sockeye salmon is far from being local, Hoffman and his Chefs Collaborative cohorts understand that even from afar they can make choices that uphold their standards of excellence.

From Virginia to Arkansas, Texas to New York, we’re seeing chefs adopt a “sea-to-table” approach to sourcing fish. And there are people on both ends of the chain doing the right thing: farmers growing the right vegetables, fishermen catching the right fish, chefs and diners cooking and eating the right food. When it comes down to it, the biggest challenge is connecting the two, finding ways to leverage technology to disrupt the industrial food model that keeps producers and consumers distant from one another. We can’t all ride our bicycle down to the dock to buy our fish, but we can think outside of the box, using all the technical tools within reach to support a new, transparent system that provides a direct connection to the source of our food. It’s that kind of commitment that will ultimately revolutionize the way we eat.

Hacking Dining is an online conversation exploring how we might use technology and design to hack a better future for dining. Join the conversation between June 2 – July 30, and share your ideas in the comments, on Twitter using #hackdining, Facebook, LinkedIn or Tumblr.

Michael Dimin is the Founding Director of Sea to Table, which works with fishermen from small-scale traditional U.S. wild fisheries, developing better markets for their sustainable catch, delivering direct from the point of landing to leading restaurant chefs and institutional dining across America. Michael’s background is in start-ups, marketing, packaging and logistics. He is joined in his Brooklyn-based loft office by his partner, son Sean Dimin, and a talented team of passionate young professionals who aim to help people eat better fish. You can find more information about Sea to Table’s story and unique business model in the recent Innovation issue of Edible Brooklyn.