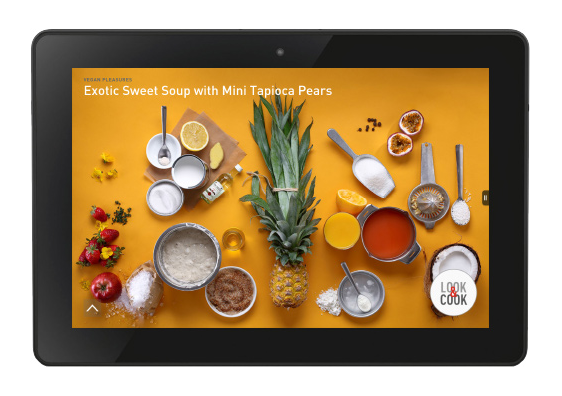 Founded in 2012 by Oran Huberman and Dudu Nimran, Look & Cook provides detailed instructions for making and perfecting dozens of dishes, the majority of which are by Israeli chef Meir Adoni. The app has been downloaded more than 500,000 times, The Media Line reports. And the Amazon partnership will drastically broaden its customer base, since the app will be built into a whopping 12 million devices, Huberman tells The Media Line.

Look & Cook’s long standing relationship with Amazon helped the team solidify the partnership, Kinetic Art VP of content and partnerships Yael Raviv tells me. The startup previously worked with the e-commerce titan to launch Look & Cook in Amazon’s app store and has developed integrated e-commerce services directly with Amazon as well. The app went though a rigorous evaluation and testing process before it was selected for Amazon Fire TV inclusion.

The free iOS and Android app offers visual, step-by-step recipes, complete with HD videos and photos, from celebrated chefs. Its design and layout simulate the experience of perusing a beautiful cookbook, while its interface offers features like recipe-integrated multi timers, professional cooking technique tips and tricks and recipe navigation flexibility for different levels of cooks. For example, if you don’t know how to make fresh pasta you can scroll through all of the steps and watch videos to learn, but if you’re already a pasta rolling wiz, you can skip ahead.

Each recipe is followed by a curated selection of kitchen tools and gadgets that are related to the recipe, and can be purchased with one click from within the app.

Kinetic Co. originally sold Look & Cook in the App Store and Google Play, but it’s now free and the startup’s revenue comes from in-app product sales, commissions from click-through sales to other websites and advertising. And this startup is smart. The app’s proprietary system optimizes e-commerce conversion by detecting which products are most suited to specific users, as well as the best times to present those products to the user, according to Raviv.

Look & Cook is looking to expand beyond the app to become a robust culinary content channel, offering more recipes by a larger group of celebrity chefs, as well as additional culinary content for a variety of medium, says Raviv.

“I think Look & Cook is like a digital Food Network,” Huberman tells The Media Line. “Most people see a recipe on TV as a passive viewer and it ends there. We want all recipes to be multi-platform, meaning you can see it on TV, and get it on your iPad or Tablet in a step-by-step format that allows you to clearly follow it.”

In addition to the Amazon Fire TV partnership, the team is working on a project with the James Beard Foundation, which includes creative vegetable recipes by renowned chefs like Thomas Keller, Mario Batali, Grant Achatz and Alice Waters, among others. The team is also putting together a multi-chef and recipe app from the Food Book Fair (expected to launch this summer), with contributions by Smitten Kitchen, Food52, The Meat Hook and more.

Look & Cook also plans to connect the app with Amazon Fresh, Amazon’s expanding grocery delivery service, meaning Amazon Fire TV users will be able to tap a button and have all of the ingredients for that mouth-watering bolognese recipe delivered over night, for example. How’s that for integration?