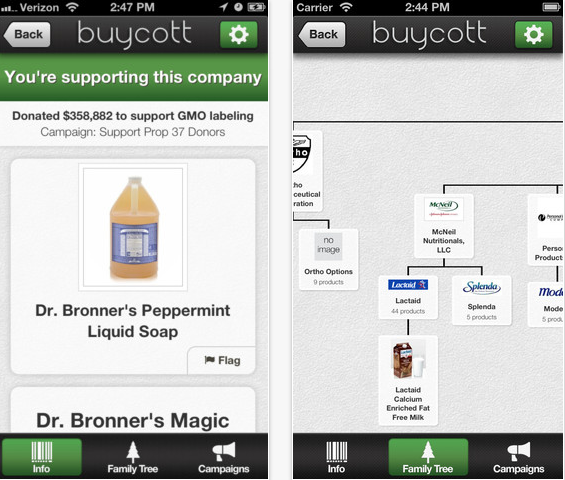 Want to know if Monsanto, Koch Industries or Johnson & Johnson are behind your favorite cereal, toilet paper or preferred sweetener? Now there’s an app for that– it’s called Buycott. The iPhone and Android app allows you to align your everyday spending with your buying principals, helping you identify products made by companies whose practices you detest and guiding you to those whose principles you support. The app also allows you to create or join boycott campaigns, like “Say No to Monsanto,” which has over 100,000 members and “Avoid Koch Industries,” which has over 75,000.

Buycott was developed in 16 months by Los Angeles-based Ivan Pardo, a 26-year-old freelance programmer. The database of products, companies and corporations is mostly user-generated, though Pardo and his team put together the initial database of products and brand relationships, which he said “required a ton of manual curation.” The app allows you to “buycott,” or actively support, companies aligned with your values and boycott those that oppose your position through the campaigns feature.

Consumers are clearly hungry for transparent information about the products they buy. When Forbes wrote about the app’s launch in early May, Buycott quickly became the number 10 most popular app in the App Store, gaining an unprecedented 10+ new users per second.

While perusing the grocery aisles, you can scan the barcode on any product and the free app will trace its lineage to the top corporate parent companies, be it Koch Industries, the GMO poster-child, Monsanto, or any other corporate food giant. 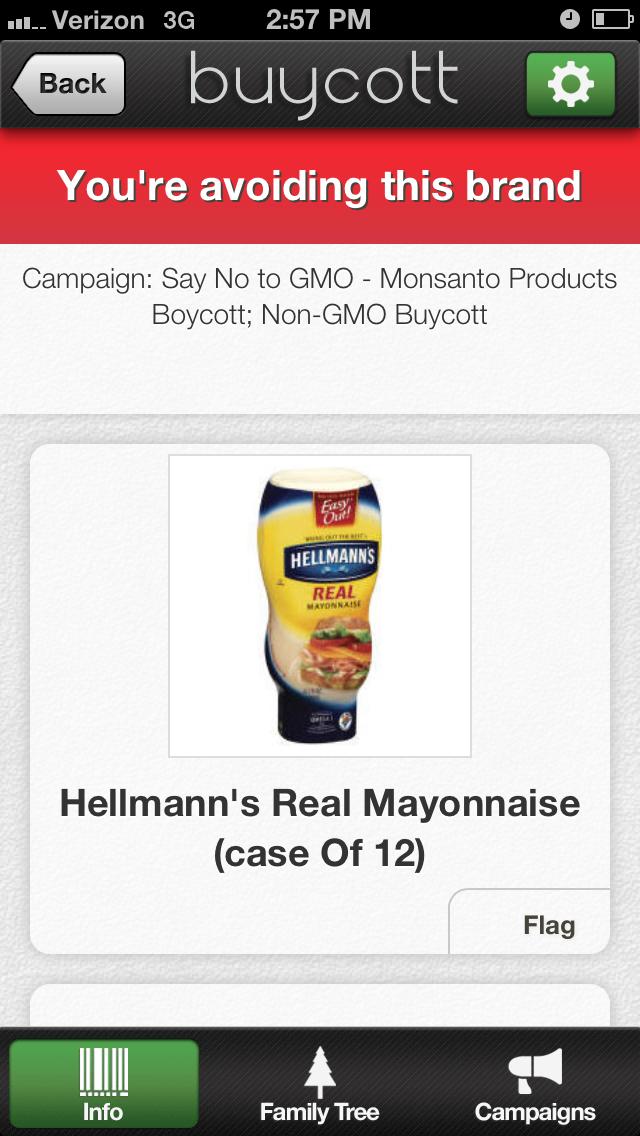 Because corporate ownership structures are ever-changing and there is no centralized database or list of this information, Buycott is not able to guarantee the accuracy of its database. Many of the corporations own more brands than are currently listed in in Buycott’s database.

For this reason, Buycott turns to its users at their point of purchase to help grow its database more rapidly. When you scan a product that is not recognized, Buycott will prompt users to identify the product name, brand name and corporate parent company name. Users can also contribute contact and background information for existing companies and, in wikipedia-like fashion, vote on the accuracy of existing information.

Consumer commitment to buying principals can be derailed by lack of transparency in labeling. Buycott attempts to combat this abundant consumer challenge. It offers user-generated campaigns such as “Support independent American Farms,” “Boycott Coca Cola,” and “Demand GMO Labeling,” which, for example, houses a list of all the companies that donated more than $150,000 to oppose GMO labeling. For a company to get off the list, it has to publicly commit to supporting mandatory GMO labeling.

Pardo describes campaigns as a “way of giving consumers a voice, created by users and organized with a goal in mind.” When you scan item barcodes the app cross-references the product owners with the companies, brands and ideals in your campaigns, indicating if the product conflicts with your campaign commitments, displayed in a red band that reads “You are avoiding this brand.” The app does not encourage users to share campaigns as of yet. But Pardo adds that “there’s still a lot of room for improvement in this regard.”

Completely self-funded and lacking a structured business model, Buycott has received a lot of investor interest, but Pardo is not ready to make any funding commitments just yet. “If I decide to raise money from investors in the near future, it would be a small seed round,” he says.

To get a first hand glimpse at Buycott, check out Forbes’ grocery store trial run of the app.

You can download Buycott on iTunes and Google play and start shopping your values today.

Two of the winning teams at Hack//Meat Silicon Vally produced similiar consumer empowerment hacks. “Best Social Good” winner Buyotic, hopes to build a community of one million empowered consumers who demand antibiotic-free meat through a mobile app that helps people shop their values by locating antibiotic-free chicken and making an online pledge to purchase it. “Best Use of Technology” winner Agent Yum is a Google glass application that allows shoppers to scan food products in the grocery store to deliver GMO and antibiotic ratings.