Food+Tech Connect and GRACE Communications Foundation present Hacking Meat, an online conversation exploring how information and technology can be used to hack (or reimagine) a more sustainable, profitable and healthy future for meat.  Join the conversation and share your ideas or product requests in the comments, on Twitter using #hackmeat, Facebook , Tumblr or at the Hack//Meat Silicon Valley happening June 21-23 in Palo Alto. 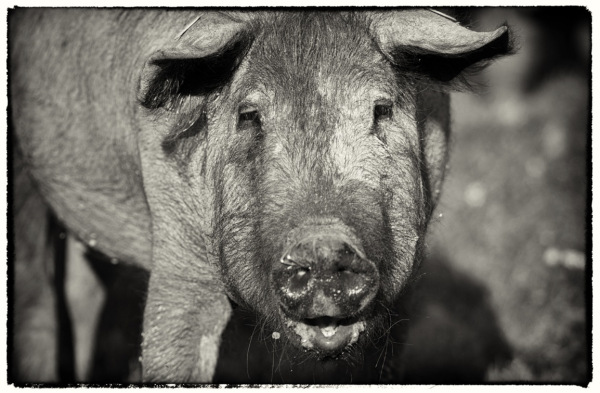 There are many (uncommon) traditional jobs related to pork products in Spain: the “maestro cortador” (master carver), that person who is able to slice the ham by hand as thin as machine sliced ham, the “maestro jamonero,” capable of knowing if ham is good, better or magnificent just by seeing its surface, and the “porquero,” the person who spends the day with the pigs (free-range iberico pigs, unique to Spain) in the forest. The Porquero is, because of the extreme conditions he is exposed to and the supreme devotion the job requires, the one that impresses me the most. Porqueros are able to understand the pigs entirely. They haven’t studied math, but they know how many acorns the pigs need to eat to gain the weight. They haven’t studied biology, but they know the best acorns for the animals…Or at least they thought so.

I always say that Spain is all about food and fun: incredible chefs, amazing wines, and the best ham. Cured ham is a huge business in that part of the Mediterranean- the jambom from France, prosciutto from Italy, and jamon from Spain (our second white meat). In Spain we eat ham every single day. Yes, that much. But big business has brought risks or situations that can compromise quality. The “porqueros” used to be the first quality filter. Technology is now helping them (and helping us) to set the best quality standards, starting with the feed, the acorns. Every year, from September to February, the Quercus, a variety of Oak Tree, produces the Quercus acorns. They are as unique as the Iberico pig itself, and only grow in the Mediterranean forest in the west part of Spain. The Iberico pig grazes on around 20 pounds of acorns everyday. The porqueros used to tell us how a year was depending on the acorn fall. Now technology helps confirm the type of year and has helped us discover some of the other benefits of acorns as well. The high anti-oxidant content found in acorns helps produce high levels of oleic acid (the only food product with a higher content of oleic acid is…olive oil).

But there are other uses for tech that can jeopardize the traditionalism and all those magical components that make the iberico such a unique animal. When the grains are enriched with oleic acid the pig metabolizes those high levels into the fat. The fat doesn’t come from natural acorns, but from a silumated acorn feed. In addition to acorns, the Iberico pig grazes upon the friuts of the forest (aka Dehesa): grasses, wild legumes, and roots. These plants produce, not only high olecid acid content, but also other healthy acids (linoleic, palmitic and stearic), exemplify the needed balance of the “bellota grade.” The next potential step for tech would be to create a bionic porquero, capable of analyzing the acorns and understanding the pigs. Not an easy task.

How can we use information and tech to reimagine the future of meat? Share your thoughts in the comments below, on Twitter using #hackmeat,on Facebook or at the Hack//Meat SV hackathon happening at The Stanford d.school in Palo Alto, June 21-23. 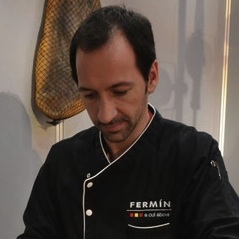 Raul Martin is a journalist who ended up writing about (and selling) Spanish hams all over the world. He is the only grandson of FERMIN, founder of Embutidos FERMIN. Despite that fact that he did not grow up surrounded by hams, he decided to join his family’s the company 8 years ago. He first worked in sales and marketing and then moved on to become the Export Manager. In 2011 he moved to the US and joined FERMIN USA, importer of the FERMIN products, as their Sales Manager. Raul has a degree in journalism, and two MAs, one in International Affairs and the other Sales and Marketing.