Food+Tech Connect and GRACE Communications Foundation present Hacking Meat, an online conversation exploring how information and technology can be used to hack (or reimagine) a more sustainable, profitable and healthy future for meat.  Join the conversation and share your ideas or product requests in the comments, on Twitter using #hackmeat, Facebook, Tumblr or at the Hack//MeatSilicon Valley happening June 21-23 in Palo Alto.

It is now widely understood that the more information consumers have about their food, the more likely they are to make purchasing decisions that are healthy and responsible – for themselves and the environment.

However, a huge challenge remains: getting easy access as a consumer to reliable information on how commercial meat is produced, processed and consigned to the supply chain. So I’d like to propose “MeatSpace,” an independently run, third-party database that tracks all available data on meat from the hoof through processing to POS, searchable by brand and product/cut. A quick check-in via the “MeatSpace” phone app tells a consumer standing at the butcher counter or picking up a package of hotdogs the breed of the animal, where – and the conditions in which – that animal was raised, and what it was fed, including a list of verifiable or likely antibiotics, hormones and additives.

While initially it will be producers with sustainable track records who participate eagerly, a significant amount of information about products across the commercial meat spectrum can already be obtained through informed research. As consumers begin to have ready access to such information, they will increasingly demand it, and shun brands that get low marks and/or withhold it. The result will be a sizable shift toward sustainably raised meat.

How can information and technology be used to create a more sustainable, profitable and healthy future for meat?Share your thoughts in the comments below, on Twitter using #hackmeat,on Facebook or at the Hack//Meat SV hackathon happening at The Stanford d.school in Palo Alto, June 21-23. 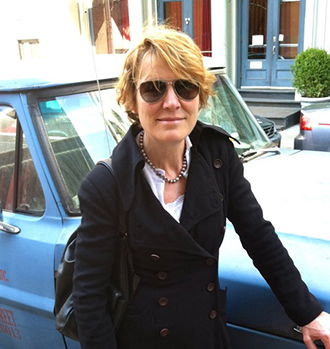 Katrina Heron is Executive Director of the Edible Schoolyard Project. From 2002 to 2010, Ms. Heron served on the organization’s board, promoting public awareness of improvements to healthy food access and implementation in public school meals programs. A journalist by training, she is a cofounder of Civil Eats  and The Food and Environment Reporting Network, new media nonprofits that provide independent reporting on food, health, agriculture and the environment. In 2008, as board chair of the Slow Food Nation conference in San Francisco, she produced a book showcasing California producers, Come To The Table: The Slow Food Way of Living,with Rodale Inc. She has frequently contributed to The New York Times and other national publications on food topics. Ms. Heron began her editing and writing career in newspapers, transitioned to magazines, and has been involved in digital media since 1995. She served as Editor-in-Chief of Wired magazine, Senior Editor at The New Yorker and Vanity Fair magazines, and Senior Editor at The New York Times Magazine. She has been an editor and writer at The Dallas Morning News, and editor-at-large for Dwell and Newsweek/The Daily Beast. Ms. Heron received her B.A. with honors from Yale.