Hacking Meat: Why #HackMeat is Perfect for NY 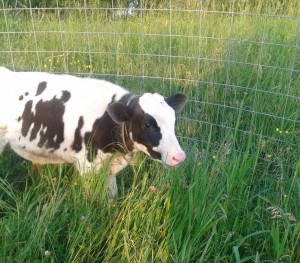 Whitey, a Holstein dairy bull calf chowing down on grass

Rural New York is a vast and beautiful place. In my lifetime, I have seen stunning changes. In the past decade, New York dairy farm numbers dropped from 7,400 to 5,400. Three million acres of New York’s grasslands now stand abandoned or underused. In total, New Yorkers farm 7 million acres, with 1 million acres grazed and 3 million acres in cropland.

New York is one of the more “local” milksheds in the nation. 40 percent of milk produced stays here in the region for fluid drinking milk. Average dairy farm size is smaller than the national average, with 100 cow and smaller farms still commonplace. With increasing Greek yogurt production adding to the products New York already produces such as soft cheeses and ice cream, a significant percentage of NYC’s dairy comes directly from rural New York. NYC consumers matter very much to us Upstate, and hopefully we matter to them! With continued farm losses, though, we are at a point where food-interested consumers in the Big Apple can have a vital role in making or breaking their dairy farmers.

Despite growing demand for the milk we produce, the farmgate milk price paid to us is the lowest in the Northeast. Dairy farms continue to empty out and more “for sale” signs on pretty cow pastures are going up. Driving around Upstate, one typically sees barns caving in, fields growing to brush and farmsteads that are a shadow of their former selves. This abandonment of New York farmland prompted Cornell University to do a study called “Green Grass, Green Jobs” on potential uses for New York’s grasslands. “Local meat” is a key recommendation in this report.

I see “local meat’ as a means of directly supplementing income of New York’s livestock and dairy farmers through the marketplace. “Green Grass, Green Jobs” predicted that if even half of New York’s grasslands could be put back to work, 7,500 new farms and 9,000 related jobs could be created. For dairy farms in particular, I see great potential for dairy rose veal and dairy beef. “Local meat” from the New York meatshed means money put directly into the hands of hardworking farmers and good food for our consumers. If even a small percentage 20,000,000 residents of the New York Metropolitan Area occasionally purchased “local meat”, opportunities for grassland farming would significantly expand in rural New York.

http://exbacksms.com/ how to get your ex back

pply chains are becoming longer and more global. This is a vulnerability for our region. How can it make sense for NYC food-aware people to sit back and watch as nearby and naturally watered grasslands empty out?

Upstate livestock farmers have the skill sets necessary to raise good meat on our grasslands. However, as “Green Grass, Green Jobs” stated, we lack marketing know-how in selling the great meat that we can and do produce. For example, three small dairy farms, including my own, launched a rose veal experiment this year. About 300,000 bull calves are born annually on New York’s dairy farms. Most are sold a few days after birth and raised in large facilities. Our goal was to instead keep the little bulls and raise them on milk and pasture for at least six months. We were inspired by our Twitter friends from the UK who have begun a Buy British rose veal program to supplement farm income, provide humane lives for little bull calves and great meat for British consumers. We raised all breeds, including the smallest Jersey bulls that cattle buyers tell us are “worthless.” Not to us! Our motto was “no bull left behind.”

We processed our first group of rose veal bulls last month after they spent a great six months grazing out an overgrown farm in the Adirondacks. The first problem that we ran into was explaining to consumers what rose veal is. The second problem was explaining to consumers what buying half or a whole bull means. We had trouble explaining a “cut sheet” and how consumers might design their cut sheet in different ways: ground veal, cutlets, osso buco, and more. We did not know how to help a consumer who wants to focus on “nose to tail” cooking.

My #Hackmeat request would be for a simple app or schematic that would show consumers what rose veal is, where various cuts come from on the animal, and what they are used for. An app could be developed just for rose veal bulls as a prototype, but I could envision eventual development of an app that would cover all livestock. This would help consumers better visualize what a half or whole of an animal contains and how they could get creative in structuring a cut sheet for their family’s needs and tastes. I would see the app as a marketing tool that farmers could provide to customers easily and through the net. This #Hackmeat project would make meat marketing a lot less daunting for the farmer while enabling consumers to take a more active role in creating our future New York meatshed.

Do you have similar issues with marketing to consumers? Would this app be helpful for you? Share your thoughts in the comments below, on Twitter using #hackmeat, on Facebook or at the Hack//Meat hackathon happening December 7-9 in NYC.

Lorraine Lewandrowski is a fourth generation dairy farmer in the Mohawk Valley of Upstate New York. Her family focuses on grazing and enjoys the extensive wildlife habitat of their farm. Lorraine is also an attorney practicing agricultural law and occasionally works as an apprentice cheesemaker at Three Village Cheese in Newport, New York. Reach out to Lorraine on Twitter @nyfarmer