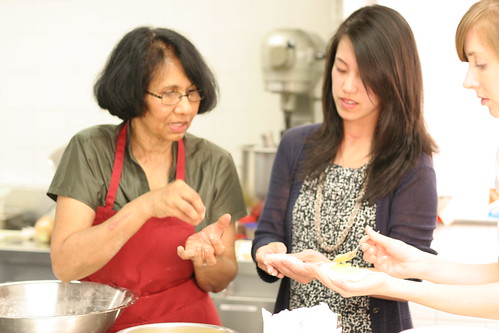 At first impression, I’m probably the last person who should be writing about hacking meat. I am not a techie and I have been a vegetarian since I was 18 (with a few more-than-insignificant relapses in the earlier years). However, I do care deeply about our food system, particularly how it both influences and diverges from food systems elsewhere in the world.

It is this passion that led me, along with two of my friends from graduate school, to start Global Kitchen, a social enterprise that both teaches and preserves traditional, authentic recipes through immigrant-led cooking classes. Often, the dishes that center on meat hold deep social and cultural significance for the people who prepare and share them.

One of our chef instructors, Ragab Rashwan, grew up in Egypt and moved to the US a few years ago with his wife Jennye. They explained to me how eating meat was treated as a special occasion once a week (on Fridays), and the meat was always sourced locally, either raised and slaughtered in the home or purchased from a halal butcher. Jennye and Ragab also described the meat holiday, Eid al-Adha, during which animals are slaughtered and shared with family, friends and those who are less fortunate. “There's a lot of symbolism and meaning, [both] religious and cultural. Meat isn't just something that has to decorate every plate at every meal,” Jennye explained.

Similarly, our friends and chef instructors at Bunna Café emphasized how Ethiopian cuisine and meat consumption reflects the country’s rich history steeped in religious traditions and values, both Christian and Muslim. “Like most third-world countries, meat is eaten primarily on special occasions, especially religious festivals and parties for guests,” said Bunna Café operator Sam Saverance. But fasting is an integral part of religious observance in Ethiopia, and meat is often omitted entirely during fasting holidays. “For most people there, fasting simply means abstaining from any form of animal product,” Saverance explained. However, most Ethiopians do eat meat and are attached to the flavor, so when it isn’t accessible (ei

ther financially or for religious reasons), they rely on a repertoire of dishes that have been developed over centuries of culinary history to emulate the savory flavor of meat. “The spicyness and earthy flavor of Berbere, the most popular spice base in the country, is a big contributor to this savoriness,” said Saverance. (He and his team at Bunna Café capitalize on this aspect as their food is 100% vegan.)

All of this to say that the historical significance and cultural meaning behind traditional recipes is precisely what I’m interested in preserving through Global Kitchen, because I believe it is this aspect of food and commensality that connects us together as people while reminding us of our history and tying us to our unique identities.

So how does technology fit into the picture? Like many of the other guest writers have mentioned, technology is a powerful tool for knowledge and information sharing. At Global Kitchen, we preserve traditional recipes by first writing them down (often these recipes have never before made it onto a piece of paper) and then sharing them on our website. All of the chef instructors we work with are small food business owners, so we use technology to promote their work as well.

But perhaps technology has the most potential in its capacity to make transparent the connections and resources needed for truly authentic ethnic cooking. After speaking with several of our chef instructors about the US meat industry, all of them had similar complaints: as a result of our meat production systems, our meat doesn’t taste good (or rather, doesn’t taste like anything), and we don’t know where it’s coming from. For many people outside of the US, the experience of cooking and eating an authentic meal is not simply a process of manipulating traditional ingredients in a specific way. It encompasses the entire food system in the context of existing cultural norms—from the farm where the animals are raised to the butcher who can prepare the meat in accordance with religious rules and customs. These practices not only affect the taste of the meat, but also play a part in the experience of eating it. There is enormous potential in using technology to connect immigrant chefs and home cooks to the meat purveyors who know how to source and slaughter their meat in a way that stays true to their traditions and values.

And hopefully as Americans who are eager (dare I say hungry) to learn about food and experience other cultures, we can benefit from this connection as well.

Do you have any ideas for ways that technology can help immigrant chefs source sustainable, flavorful meat and preserve authentic ethnic recipes? Let us know on Twitter using #hackmeat, on Facebook or at the Hack//Meat hackathon happening December 7-9 in NYC.

About the Author
Leah Selim is an MA Candidate in Food Systems at NYU and leads communications and marketing efforts for Global Kitchen. She also works as an individual contractor for ReliefWeb under the UN Office for the Coordination of Humanitarian Affairs (although all views expressed here are her own). She holds a BA in English and Psychology from the University of Virginia.
Previous Next
agriculture, bunna cafe, cooking startup, egyptian, ethiopian, ethnic cooking, food startup, food startups, food tech, future of meat, Global Kitchen, hack meat, hacking meat, immigrants, information, Leah Selim, muslim, ragab rashwan, recipes, technology, vegetarian