Hacking Meat: Take the Mystery Out of Meat Labels 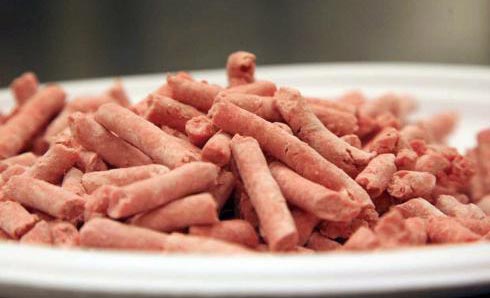 Via Center for Food Safety

Since I write about food issues for a living, I get asked a whole lot of questions about what to eat and what not to eat. Friends, family, and acquaintances ask questions like: “Are there things you wont eat because of your job?” “What kind of eggs do you buy?” “Is Subway’s meat OK? Because I eat lunch there a lot.”

People seem to be the most concerned and confused about animal products. Unfortunately, oftentimes the labels we find on meat, poultry, and eggs at the grocery store raise more questions than answers. What on earth does it mean when meat is labeled as “all natural”? What does “antibiotic-free” mean and why should anyone care? Are any of these labels enforced?

Increasingly, consumers care about the answers to these questions. Take, for instance, the firestorm over “pink slime” in ground beef last spring. The product –dubbed pink slime by a U.S. Department of Agriculture microbiologist in an internal email that was obtained by the New York Times in 2009 – is made by centrifuging larger, fatty scraps of beef to recover small, lean pieces of meat. The resulting lean, pink paste is treated with ammonia gas to kill bacteria like Salmonella and E. coli O157:H7, flash frozen into blocks, and then eventually mixed (up to 15 percent) into fresh ground beef and ground beef patties. The product is actually called Lean Finely Textured Beef, or LFTB, but consumers did not see these words on their meat labels.

Instead, Americans learned that LFTB was used in the vast majority of ground beef from the thousands of media reports, blog posts, and social media comments that erupted in March 2012.

According to USDA’s policy, LFTB didn’t need to be labeled: ammonia is considered a processing aid, not an ingredient, so, the manufacturer and the meat industry argued, “Beef is beef.” Consumers clearly didn’t see it that way. Just about every major grocery retailer was forced to drop LFTB from their ground beef after hearing from thousands of angry customers.

I actually think the industry could have avoided the outrage if they’d just labeled LFTB as an ingredient in the first place. That way, the consumers who didn’t like the sound of LFTB could easily avoid it and the shoppers who agreed “Beef is beef” could save a few cents a pound.

Walmart, to their credit, responded to the controversy by immediately offering to label LFTB to give consumers a choice. Since then, several companies who opted to keep using the product voluntarily started labeling it.

As the adage goes, adequate information is essential to the free market. If consumers want more transparent meat labels, they’re going to have to ask for them.

For those meat eaters interested in learning more about the state of labeling, the USDA’s Food Safety and Inspection Service (the agency charged with keeping billions of pounds of American meat, poultry, and processed egg products safe and properly labeled) has a glossary of terms that are currently legally allowed on meat labels.

Check out the USDA's guide to Meat & Poultry Labeling Terms for more details.

Are you concerned or confused about animal product labels? Let us know how retailers could make it easier for you to navigate food labels or make purchasing decisions on Twitter using #hackmeat, on Facebook or at the Hack//Meat hackathon happening December 7-9 in NYC.

Helena Bottemiller is a Washington, DC-based reporter covering food policy and politics for Food Safety News. Helena first delved into the world of food safety while writing her thesis on the U.S. Food and Drug Administration at Claremont McKenna College in Los Angeles. At Food Safety News, she has covered Congress, the White House, the Supreme Court and several high-profile food safety stories, including the half-billion Salmonella egg recall and the oil spill in the Gulf of Mexico. Helena has appeared on BBC World and been featured in USA Today and her work is widely cited by mainstream and niche media. She tweets about food and agriculture policy at @hbottemiller.