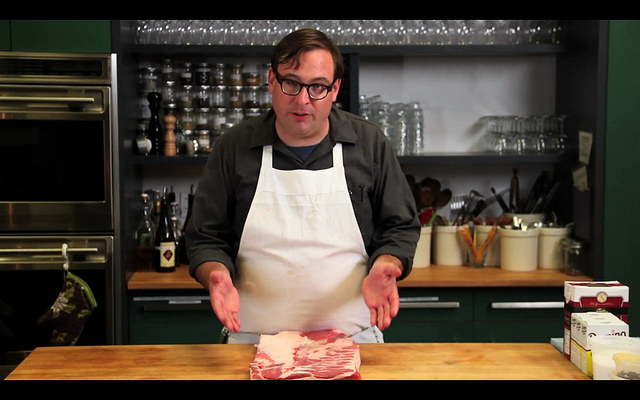 There is a growing movement of do-it-yourselfers (DIYers) eager not just to bring home the bacon, but to bring home the pork, butcher it, cure it, smoke it and make their own bacon. Some enroll in butchery courses, while others are turning to YouTube and the Internet to learn the tricks of the trade. And now it's even more convenient and affordable to learn how to make your own from the best in the business, thanks to Tom Mylan, co-owner and executive butcher of The Meat Hook, and Open Air Publishing. 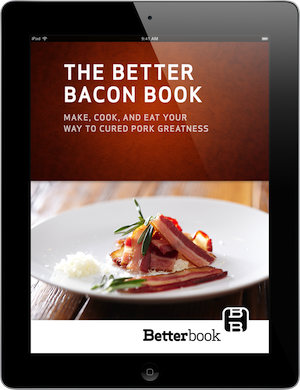 Earlier this year, Mylan, in collaboration with Ari Weinzweig of Zingerman’s Deli and Open Air Publishing, published “The Better Bacon Book” app (available on iTunes for iPad, iPhone and iPod Touch), a how-to guide for learning how to make and cook your own bacon, face bacon, pancetta, guanciale, Canadian bacon and pork belly. The digital book includes 20 instructional videos to help you learn how to butcher and make your own bacon, as well as how to make your own pork smoker. It also includes over 30 bacon-themed recipes from chefs like Fatty Crab's Zak Pelaccio, Hearth's Marco Canora and The Meatball Shop's Michael Chernow and Daniel Holzman. And if you're not up for making the bacon yourself, you can always turn to their bacon buying guide to get expert tips on the best mail-order bacon from Weinzweig. 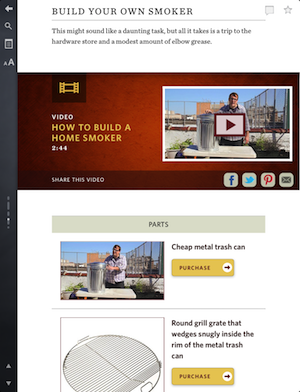 The digital format is a perfect medium for this kind of instructional book, making it easy to show people how to do something rather trying to describe how to do it.

The Disappearing Pig from Open Air Publishing on Vimeo.

Perhaps one of its more innovative features is the ability to purchase bacon and equipment right from the app, a feature Open Air Publishing also offered in the Food52's Holiday & Recipe Survival Guide. While there is no data available for how many users actually buy smokers or the mail-order bacon, Open Air Publishing CEO Jon Feldman tells me that more than 10 percent of readers have linked out to the Bradley smoker, the Allan Benton's Bacon and some of the knives and kitchen products.

True to the ethos upon which the butchery renaissance is being built, the book strikes an important balance between being hip and informative, and m

How to win back your ex

akes a compelling case for buying good meat from people you can trust: a butcher, a local greenmarket farmer, a sustainable supplier like Heritage Foods USA, or “a grocery store that doesn't sell meat on sad foam trays.”

“You can't make superior bacon from second-rate meat. Because bacon is such a simple thing- at its most basic, just pork, salt, and time -you need to use the best raw material you can get your hands on…So long as the pig was raised humanely, on a small farm and not in some soul-crushing tenth circle of porcine hell, you're good to go,” writes author Rob Willey.

I had a chance to catch up with Mylan by email to learn more about the book's production process and how technology can transform the future of meat.

Danielle Gould: How can technology be used to hack (or reimagine) the future of meat?

Tom Mylan: I think the best example of how IT can hack meat is the Japanese Wagyu model. Every piece of meat is traceable from birth to slaughter. When you go to a restaurant you can scan a QR code and get the whole family tree of the animal that you're eating, where it was born, who the farmer was, how long ago it was slaughtered and even a ultrasound image of the marbling of it's meat! I think that kind of useful, practical, easy traceability would go a long way towards giving people the information they need to make choices about the meat they eat.

DG: Is technology contributing to the butchery renaissance? If so, how?

TM: Of course! When I was trying to learn how to butcher there were very few resources, not really any books, and I ended up teaching myself a lot of stuff by watching YouTube videos. I would be nothing without YouTube.

DG: Why did you decide to publish The Better Bacon Book as an iPad app and not a print book?

TM: You'll have to ask Jon that as I'm not the publisher, just “the talent” but for me I think that the iPad format is just so much better for doing informative and instructional things. Right now I'm writing the Meat Hook Meat Book and trying to describe to a reader how to do something complicated in print is very difficult and tedious. The Better Bacon Book is like “here, let me just show you!”

DG: What was the production process like? How long did it take?

TM: The actual shooting took two days. One day for the bacon recipes and one day on my roof deck to show how to build the improvised smoker which took for every because my apt was right over the flight path for LaGuardia and a plane came by every 90 seconds so we had to do everything in 45 second segments so it wouldn't sound like we were cooking at the airport.

DG: Why did you choose to work with Open Air Publishing?

TM: They really chose me. I was a little skeptical at first but then I saw the format and how amazing digital books could be and I was sold. I hadn't seen anything like it.

DG: What features of the app do you think are most innovative?

TM: The navigation is amazing and allows you to jump around with the same ease as a real book, which is how I read cookbooks, I get excited, flip from section to section. Most digital stuff I've used is the more flip, flip, flip which makes me crazy. Obviously the video embeds are really cool too but that's not exactly re-inventing the wheel, but they're very well done.

DG: Do you have any more digital projects on the horizon?

TM: Right now, No. I think there will be a digital version of the Meat Hook Meat Book which should be out in Spring 2014 but it's too early to say what that will look like. The devices and the app technology are just changing too fast to even imagine.

Are you or do you aspire to be a DIY butcher? Let us know how you're learning the craft in the comments, on Twitter using #hackmeat, on Facebook or at the Hack//Meat hackathon happening December 7-9 in NYC.