Why Your Groceries May Be More Expensive in 2013 [Infographic]

Consumers will likely be facing increased food prices of 4 to 5 percent in 2013 – as opposed to the average inflation of 2.5 to 3.5 percent – according to Consumer Price Index (CPI) data released by the USDA last Wednesday. Why? The U.S. is currently undergoing a severe drought, which is devastating farms throughout the Midwest. As a result, there has been a significant decrease in corn and soybean yields – more than 60 percent of US farms are located in drought-stricken regions- which are pushing their prices higher and are increasing the costs of retail food products like meat, milk and cereals.

While the full impact of the drought on commodity prices are still unknown, USDA food Economist Richard Volpe spoke with Climate Desk correspondent James West about the data, saying:

“We’re expecting another year of tough food prices, bad news for consumers,” said Volpe. “The difference between normal and higher than normal in this case is one hundred percent attributable to the drought. The food price index data is released by USDA each month; it is a set of numbers that indicates how much an average shopper is likely to pay at the supermarket.”

In the infographic below, Climate Desk compares the average prices of basic groceries with USDA’s projected prices for 2013. 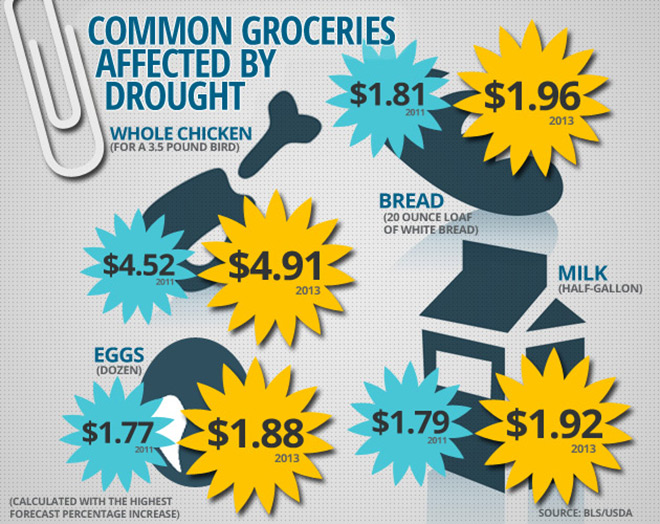 This may also have a huge impact on global food security, which could spark social unrest, as Wired has previously reported.

About the Author
Danielle Gould is the founder of Food+Tech Connect. Connect with her on Twitter, Google+, or Linkedin.
Previous Next
agriculture, Consumer Price Index, drought, economics, food prices, groceries, infographic, USDA