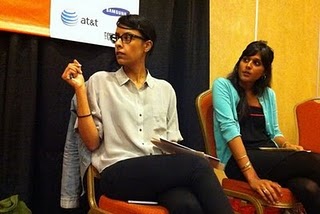 Photo by Christian Payne of Documentally

Last week, Jas and I moderated a core conversation at SXSW entitled How Technology is Revolutionizing the Way We Eat. In this forum, the audience was encouraged to participate and share. We had a great turnout from individuals at the Food Network, Martha Stewart to IDEO and developers of new technologies and apps in the food space and of course a grip of food bloggers (yay!).

Since writing the original proposal back in July, the concept kind of morphed into a discussion that covered not only the effect existing technologies, bloggers, online cooking shows, etc. are having, but also about the myriad of new technologies and apps that have been developed in the food space. It was a great opportunity for those that are creating new food apps and technologies and those with existing food brands that are looking to expand in the area of technology to get a better sense of consumption habits among the audience members.

The discussion flew by and we did not get a chance to delve deeply into all of the areas that technology and food are hitting right now, but there were definitely some great insights about how technology has affected the realm of food not only in how we eat, cook and dine, but also how we form communities and run food businesses. For instance, we discussed Food Sprout, a data-driven website that is mapping the food supply chain to improve transparency about where our food comes from and helping companies become more sustainable by connecting consumers, restaurants, food manufactures and suppliers. We talked about how sites like Yummlyare now making it easier for people that have strict dietary restrictions to find recipes online and how new companies like Gojeecan provide us with personalized recipe recommendations based on what we have purchased on our loyalty cards at grocery stores.

During the course of preparing for the session and getting to know new innovations in the space and the people behind them, there were certain trends I was drawn to that I want to share. One area we touched upon that I feel passionate about is how technology is allowing locally grown foods to be more accessible to the masses. I grew up in a household where my mother was constantly on a quest for finding farmstands with the freshest produce. I think in some ways she was attempting to attain the freshness in the vegetables and fruits she grew up eating in India. Her obsession has become mine so I am thrilled when I find out about sites like Real Time Farms.com,Greenling and Relay.

Another area that I am involved in is food education for children. I volunteer for The Children’s Storefront, Slow Food, Just Food and Added Value Farms – organizations that support programs that teach children about healthful cooking, gardening and general food knowledge. There is much opportunity in this space for technology to help further this message and several initiatives have been put forth.

Foodista, a crowdsourced resource for recipes, encourages its users to submit their favorite kid-friendly and family cooking videos to be featured on The Kids Cook Monday!, a program that provides resources such as recipes and videos to help families cook together at least once a week. A children’s cooking video game was released for Nintendo by America’s Test Kitchen called Let’s Get Cooking and has been getting positive reviews. One of the most vocal and active advocates of this cause is Jamie Oliver who won last year’s TED Prize for his Food Revolution project, a movement with a strong focus on teaching children healthful eating and cooking. His speech from last year was inspiring and he has gone on to partner with IDEO to formCooking & Company, a program that extends the Food Revolution from schools to the workplace with a goal of teaching 350,000 adults basic cooking skills.

One other area I find fascinating is how technology is reviving food traditions and craft. It is kind of like old world meeting new, where through blogs and videos, a larger audience can now learn how to brew beer, make cheese, jar & pickle, bake bread and also access cooking traditions and techniques from all over the world – making kimchi for instance! David Chang released Lucky Peach, a quarterly iPad app and print journal that introduces one dish or ingredient at a time (first one was on ramen) through several facets with a host of videos, recipes, graphics, etc. In addition we now have more access to finding artisanal and small batch goods with sites like Lovefre.shwhich allows you to upload voice recorded interviews and photos about local artisanal shops and owners in your area that you love so that others can find them too.

Michael Rulhman wrote Ratio: The Simple Codes Behind the Craft of Everyday Cooking which is about how many traditional recipes originated based on ratios of the weights of ingredients. For instance, the pound cake earned its name from its ingredient measures – 1 pound each of flour, butter, eggs and sugar with a ratio of 1:1:1:1. Along with his book, Rulhman released the Ratio application that calculates the amount of ingredients you need based on what you have or how much you want to make. Rulhman worked with Will Turnagewho developed the application and the two have just launched a new (and amazing) iPad application in a similar vein called Bread Baking Basics. Now, there is even an application called Cookulus where a customized recipe will be provided after you select your preference in cookies using three scales: crispy-soft, chewy-crunchy and thin-thick!

While at SXSW, I also attended a really interesting talk actually given by Will Turnage and his colleague Chloe Gottlieb entitled The Refrigerator Speaks: The Secret Language of Things that covered new smart products and the ability for embedded sensors in these devices to make an impact on our lives. Some of their talk touched on innovations in the food industry such as the iGrill, the first grilling/cooking thermometer and application which transmits temperature measures to your smartphone through a Bluetooth connection, but also addressed where trends will take us in the future, which we did not have time to discuss at our session.

Many of the new consumer facing technologies in the food space that I have come across are focusing on customized recommendations based on previous choices, diet preferences, etc (Food On the Table,Fourquare Explore Tab), transparency between the seller and buyer (Food Sprout, QR codes on vegetables), tighter relationships between merchants and consumers (Social Grub on Facebook, Specials on Foursquare), forming social communities (Super Marmite,Grubwithus), sales/specials aggregators (AnyLeaf, Seven Lunches), education (Snooth wine app), improving economies of scale for buyers (Wholeshare) and closer to a time where our smartphones are telling us we’re out of milk in the fridge and need to pick up more:)

There is so much more and I could go on for hours on this topic but I will spare you. You can find a great recap on the additional apps and technologies mentioned at this session at Tasty Touring. I also wanted to call out a couple resources if you are interested in learning more. Food+Tech Connect, which is run by Danielle Gould, provides a wealth of information on this topic and was a great resource for preparing for this session. You can find in-depth interviews with many of the innovators in the space mentioned above at Danielle’s site. Food+Tech Connect also put on ideaCOMM at SXSW, an event with foods prepared by chefs that locally sourced their materials using some of the newest food applications and technologies.

I am a member of the related meetup group in New York that is organized by Lizzy Greene that has been a really amazing way to learn about new developments in the space. It’s where I found out about and met the creators of Real Time Farms.com.  Also during SXSW this year, TechMunch, a food bloggers conference that features experts in the digital field, was held. You can view their site for upcoming conference dates.

Thanks to all that attended and special thanks to Danielle Gould of Food+Tech Connect and Will Turnage of Bread Baking Basics for providing some great information and resources on the topic. Please comment below if you’d like to add more to this discussion!

This post originally appeared on THE ABCD’S OF COOKING.

About the Author
http://abcdsofcooking.blogspot.com/
Chitra divides her time between the worlds of food & tech. She is the Founder of The ABCD's of Cooking and Director of Marketing at BlogTalkRadio.
Previous Next
Food Revolution, food sprout, food tech, food technology, gojee, Greenling, IDEO, real time farms, recipe relay, sxsw, sxswi, the wine agent, will turnage