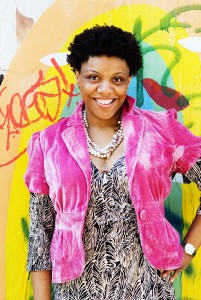 I am thrilled to announce that Nichelle Stephens will be joining Food+Tech Connect as our resident app expert. Be sure not to miss Nichelle’s Monday posts on the latest apps that are changing the way we produce, eat, and interact with food.

Nichelle Stephens is a blogger, cupcake enthusiast, editor, event organizer and social media strategist. She is the editor of the NAACP Image Award winning Pepsi We Inspire, a branded lifestyle blog and community for African American women. Nichelle is the co-founding editor of Cupcakes Take The Cake, the most popular blog about cupcakes.

Nichelle is also the founder of Keeping Nickels, a personal finance and business accounting blog for freelancers and entrepreneurs.

Nichelle has appeared on CNN, The Today Show, Martha Stewart, and The Food Network.

Nichelle has been quoted in The Austin Chronicle, Black Enterprise, Inc., Life and Style, The Los Angeles Times, The New York Daily News and The New York Times.

Nichelle has competed thrice in the Great Hot Dog Cookoff.

Nichelle has presented at Ignite NYC.

Nichelle spoke about the business of blogging at Blogging While Brown (June 2010).

Nichelle will be competing in the 6th Annual Casserole Cookoff (October 2010).

Nichelle will be moderating a panel at Lavish in Atlanta (December 2010).